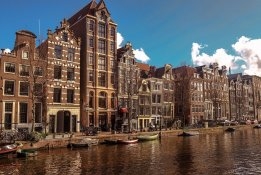 The new hire is based in Amsterdam. File Image / Pixabay

The GoodShipping initiative, the project launched by GoodFuels to advance the use of biofuel bunkers, has hired a commercial manager.

Tina Trinks has joined GoodShipping as commercial manager as of this month, based in Amsterdam, according to an update to her LinkedIn profile.

Trinks has previously served in a variety of sales roles, most recently working as sales manager for reusable bottle producer Dopper.

The use of biofuels in shipping is advancing rapidly, and GoodFuels has been a partner in several trials of bunker blends including biofuels over the past year. The growth in European biofuel bunker demand has been supported by subsidies and other incentives, and a key question for the development of the market at the global level will be whether these support measures will be implemented in bunker hubs elsewhere in the world.

The company is looking for computer-proficient candidates fluent in English and with experience either as a bunker trader or broker.