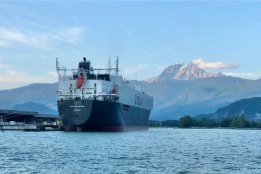 Major international shipowner associations today called on governments to back their proposal to place a $2/mt levy on marine fuel consumed to help fund industry efforts towards decarbonisation.

The fund would be overseen by IMO.

The proposal, originally put forward last year, will be discussed by IMO this week at the 75th session of the Marine Environment Protection Committee (MEPC75).

The proposal follows adoption of the decarbonization targets of IMO 2030, IMO 2050, and to ultimately eliminate GHG emissions completely by the end of this century.

While there are a number of promising routes to achieve these goals, industry consensus is that the technology and mechanisms to fully achieve the targets do not currently exist.

"There are several potential solutions, such as hydrogen or ammonia produced from renewable energy sources, but these do not yet exist in a scale or form that can be applied to large ocean-going ships.  A host of complex technical questions remain to be answered, including safety, storage, distribution, energy density considerations and lifecycle impacts," the group said in a statement released today.

"In short, we do not yet know what the fuels of the future will be."

A number of governments are understood to be positive to the proposal, subject to addressing issues such as governance.

"Now, we look forward to seeing the member states put weight behind their calls for action and advance our proposal, which can actually help the industry develop the technology needed to reach our decarbonisation targets."

SMW 2021: Shell to Try Out Hydrogen Fuel Cells in Singapore

The company will work with SembCorp Marine and LMG Marin to retrofit a ro-ro cargo vessel with an auxiliary power unit fuel cell.