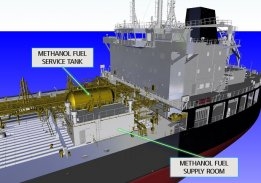 Classification society DNV GL has given its approval in principle to a design for a methanol-powered products tanker developed by a joint industry product.

The ship's cargo capacity is reduced by just 0.6% compared to a diesel-only vessel, and the design would cost only 10% more to build, the organisation said.

The design incorporates the ability to run on VLSFO as well as methanol.

"DNV GL has assessed this design in accordance with its rules and all international standards and is pleased to provide Approval in Principle for a vessel which can make a significant contribution to lower emissions," Vidar Dolonen, regional manager of DNV GL in Korea and Japan, said in the statement.

"In the drive to decarbonize shipping, DNV GL has identified an important role for methanol produced from biomass or renewable energy sources."

There were 17 more orders of gas-powered tonnage in November.