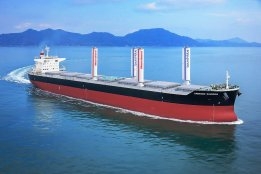 Shipping companies are increasingly taking on wind propulsion systems as a means of cutting fuel consumption and GHG emissions ahead of upcoming regulations. Image Credit: Bound4blue

The organisation will seek to position itself "at the centre of technological, technical  and political progressions in this fast-paced technology sector alongside their central role of offering technical certification and pre-certification services for ships using wind propulsion technology," it said in an emailed statement on Thursday.

Shipping companies are increasingly taking on wind propulsion systems as a means of cutting fuel consumption and GHG emissions ahead of upcoming regulations.

The cost of wind propulsion systems is coming down as installations increase, DNV said.

"DNV has comprehensive wind expertise which we will bring to our membership role in IWSA to support the anticipated expansion of wind propulsion technology for the use of wind as a renewable energy source by ships," Hasso Hoffmeister, senior principal engineer at DNV, said in the statement.

"IWSA has made great strides in facilitating the accelerated uptake of wind and is the key convenor of important players.

"In this ever-advancing technology sector, DNV is perfectly positioned to support the wind revolution."

PRICES: Bunker Prices Advanced at Most Ports on Wednesday