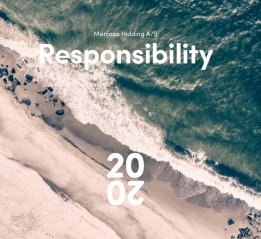 The company has released a responsibility report for 2020, setting targets for itself across a wide range of themes. Image Credit: Monjasa

"An important new contribution to this extended Responsibility framework is to provide clarity on how Monjasa works with the climate agenda.

"When we fully understand the impact of our land and sea-based activities, we are determined to work closely with our partners, including Danish Shipping, and strongly support the greenhouse gas reduction strategy adopted by the IMO in 2018."

The company will calculate its scope 1, 2 and 3 emissions as part of the strategy.

In its responsibility report for 2020, released with Monday's statement, the firm sets itself an ambition of "being an enabler in the logistics of environmentally friendly fuels."

As part of this ambition, the company will seek to achieve "active participation with at least one relevant working group in 2021," it said in the report.

This working group "could be an industry body or a regulatory body," a company representative told Ship & Bunker by email on Monday.

The company has previously expressed reluctance to jump into the alternative bunker market in the short term, in the way Peninsula Petroleum has with its new LNG bunkering business.

"At the moment, alternative fuels are a small percentage of the overall demand for energy or fuel," Svend Mølholt, chief operation officer at Monjasa, said in an interview with Ship & Bunker last month.

"We hope to be able to support the transition to alternative fuels, but that continues to be an upstream task in developing those to be more ready for mass consumption and distribution.

"What we looked at at the moment to support this transition is to find companies that are investigating and developing in the sphere of alternative fuels to see how we can advise on the logistical side of these opportunities to make it something that's more readily available for the shipping industry.

"That's where we're putting in our efforts at the moment.

"At a later point, that could obviously translate into new logistical setups, be that on LNG or ammonia or something else.

"But at the moment, we think where we can make the largest impact is by spurring and helping out on what the logistics of alternative fuels looks like."

HSBC has awarded the firm a significant increase in funding.

Singapore HSFO Contaminant Was Seen in Fujairah in 2004: Verifuel

The chemical component apparently causing the problems is 1,2-dichloroethane.

The EverLoNG project will demonstrate carbon capture systems on board two LNG-fuelled ships.