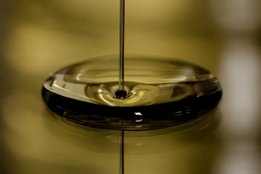 Fuels will be produced by blending with a 0% S component. File Image / Pixabay

For the last 65+ years the fuel of choice for large marine engines has been IF380 and IF180.  These fuels are comprised of predominantly atmospheric residue or vacuum residue (VR) plus small amounts of low viscosity, low density components to meet the specification requirements for viscosity and/or density.  Once these specs were met all other parameters fell into place.  The residues themselves were not altered in any way, i.e., they are not refined products but rather by-products of the distillation process and so were priced accordingly, at a discount to the crude from which they were made.

This world will be upended with the introduction of the 0.5% S specification for marine fuel.  Sulfur will become the controlling spec parameter for marine fuels, and S blends linearly on a mass % basis.  Therefore one ton of a 1.0%S fuel will require blending with one ton of ~0% S (i.e. ULSD) fuel to produce two tons of 0.5% S fuel.  The generalized formula for calculating the required percent of low S cutter stock to meet the specification % S is as follows:

While the fuels will be blended or produced to meet the S spec, all the other parameters may be expected to vary widely, especially Density and Viscosity.

While there are several very sweet crudes (<0.25% S) that have VR's (preferred by refiners) that meet the 0.5% requirement, these crudes sell at a premium, and generally are very light (high API) hence have low yields of VR.

Both increase the H/C ratio, and in doing so change (favorably) all other traditional IFO parameters.  It should also be noted that a 0.5% compliant diesel fuel has been available for many decades.  It was/and is called Marine Gas Oil.  The new products, whatever they are, are not likely to be based on new, revolutionary technology but rather tweaking already well-known processes.

The two unanswered questions, in my view, are:

Rudolph Kassinger, Ph.D. is a true oil and bunker industry veteran with over 60 years experience in the petroleum industry that includes over 25 years as a Consultant to DNV Petroleum Services and over 27 years experience with Exxon Corporation and its affiliates. Operating today as an independent consultant, he is a frequent commentator on industry matters, and continues to be called upon as an expert witness and to speak at international events.

The Islamic Revolution Guards Corps has taken the ship to an Iranian port for examination.