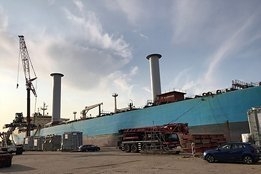 A group of oil majors represented via OGCI Climate Investments have led an €8 million ($8.8 million) investment round in Finland's Norsepower Oy Ltd (Norsepower) to help boost the uptake of its rotor sail wind-power solution for ships.

Norsepower says the investment will enable it to scale up production at its manufacturing facilities as part of the next phase of its commercialisation.

The investment is also the latest indication that wind power is being taken increasingly seriously as a viable option for propulsion of the model merchant fleet.

Since its establishment in November 2012, Norsepower say it has raised more than $24 million of funding. In addition to OGCI Climate Investments, European venture capital funds and private investors, Norsepower has been funded by the European Commission and the Finnish Funding Agency for Technology and Innovation.