The Smart Sounding Scale "Honesty", developed in June 2014 to solve the problem of errors when measuring bunker fuel oil for ships due to the "Cappuccino Effect", has now sold over 1000 units and is being used onboard more than 500 vessels around the world.

Adopted for its high accuracy and efficiency, Honesty greatly reduces the time of tank sounding by about 75% compared to traditional methods.

Customers' of Honesty say the following:

the efficiency of Honesty has been attracting more and more attention

In addition to reducing the measuring time of tank sounding by approximately 75%, it is also expected to prevent oil leakage accidents due to delays in measurement.

It is also clear that our customers have chosen Honesty as crews are able to get accurate measurement values with the innovative scale and to help prevent disputes with suppliers regarding the amount of fuel delivered.

In the marine industry, following the introduction of the IMO 2020 environmental regulations that came into effect on January 1, 2020, the use of MGO (marine gas oil) and similar transparent fuels is increasing. As it is difficult to measure these fuels with conventional tank sounding methods, the efficiency of Honesty has been attracting more and more attention.

We are happy to add that some of our customers say that Honesty helps improve their work environment. 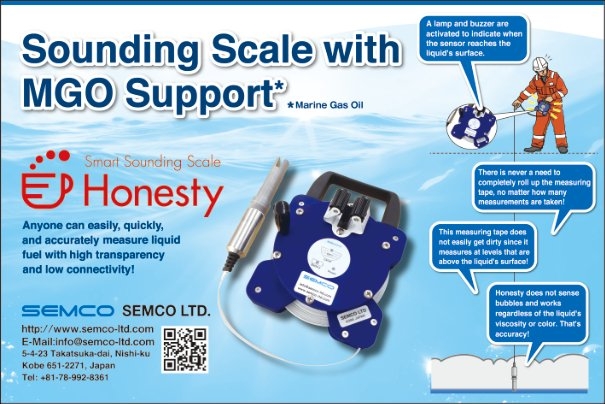 Oil Plummets Over 5% On Covid Panic and Stock Buildups

However, there remain signs of a crude market rebalance.

Carbon taxes may be needed to make zero-carbon fuels more attractive, according to BLUE's Adrian Tolson.

Trump Win Would be Bullish for Tankers, Biden for Bulkers: VesselsValue

A win for President Trump could be more bullish for the tanker market because of his support for US crude production.