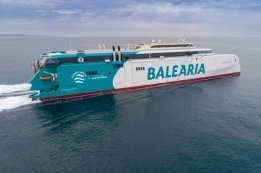 Canada's BC Ferries and Spanish ferry company Balearia, both of which operate LNG-powered ferries, are among those already looking at life beyond gas bunkers.

In Balearia's case, the firm has added eight gas-powered ferries to its fleet since first deciding to take on LNG bunkering as a technology six years ago, and has more vessels to come, Georges Bassoul, director of Balearia, said at industry association Interferry's annual conference last week.

"We are very proud that emissions are down 40%," he said.

"We've had to work with port authorities on bunkering and train our people.  But we know gas is probably transitional so we are also studying other technologies."

BC Ferries also has a number of ferries both already operating on LNG and on order, having been an early adopter of gas bunkers with its first order for the alternatively-fuelled tonnage back in 2013.

Although the headline case for LNG at the time was compliance with tightening sulfur regulations, BC Ferries was already operating on ultra low sulfur diesel so the decision to switch was made primarily for cost savings rather than environmental reasons. Compared to the distillates it was burning at the time, the firm believed moving to LNG would cut cut its fuel bill in half.

With post-IMO2020 focus having shifted to reducing carbon emissions, LNG is positioned as a transitional fuel that today offers a better emissions footprint than oil and whose relevance in the long term comes from the expected ability to switch supply from fossil LNG to carbon neutral equivalents.

To that end, bio-LNG is already becoming available in small quantities, but even the LNG lobby itself sees commercially viable carbon neutral synthetic fuels, including LNG, as being decades away.

There is currently no consensus on how quickly better bunker alternatives can be made available, but Interferry as a whole is now placing an increased emphasis on electrification. It could also be the very qualities that made the sector attractive for early LNG adoption - smaller vessels operating on known, fixed routes - might also be the very qualities that make them suitable for switching away from LNG to battery power.

As far as BC Ferries are concerned, this is very much the long term plan. And unlike its decision to use LNG, electrification is very much driven by environmental goals.

"We see reducing emissions like safety – it's expected," Mark Collins, President and Chief Executive Officer at BC Ferries, commented on its pathway towards zero emissions.

"Electrification is the way to go for Canadian operators as we are blessed with a lot of clean hydro power.

"Meanwhile we see LNG as a sensible interim since British Columbia has the world's cheapest supply – but all our LNG vessels are designed to be electric in the future."

Whether companies are making the switch from LNG or conventional oil bunkers, industry consensus is that carbon neutral energy is going to cost more that today's energy prices.

For some, there are question marks over how that cost will be covered.

"Zero is a must – it's a survival tool - but there is no silver bullet. We are talking about different alternatives including hydrogen, methanol and batteries," says Niclas Martensson, CEO of Stena Line in Sweden who's company also operates the world's first methanol powered ferry.

"We don't yet see that the public is willing to pay for this but we can't wait for their willingness. The industry must have the mindset to take the first step. We have to protect Mother Earth."

However, others, like Patty Rubstello, CEO at Washington State Ferries in the US, says he can count on government support to bridge the cost gap.

"Our customers want it and they don't have to pay for it because the government will come up with the dollars," he said.

"In future we will be fully hybrid."