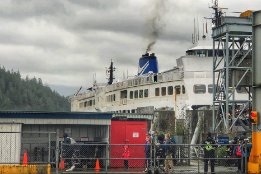 Global ferry industry association Interferry says it will use the results of a new study highlighting the sector's economic clout to help its drive towards electrification.

The study, commissioned by Interferry and carried out by UK-based consultancy Oxford Economics, was said to have revealed "startling statistics" on the extent of the global ferry industry's value to the world economy.

The study found that in 2019, the latest pre-Covid full-year figures, ferries carried 4.27 billion passengers – on a par with aviation at around 4.5 billion – and 373 million vehicles across a worldwide fleet of 15,400 vessels.

Among other findings, the industry provided 1.1 million jobs, contributed $60 billion to the world GDP and represented approximately 20% of shipping's economic value to the European Union.

"Going forward, we will use the findings from our study on the ferry industry's size and economic impact to push decision makers towards funding port-side power development," said Interferry CEO Mike Corrigan, who announced the findings last week at Interferry's 45th annual conference in Santander, Spain.

"A unified approach is critical in supporting operators' own commitment to achieving the emissions reduction targets set by the IMO, European Union and other regulators on the path to zero."

The need for a multi-stakeholder approach to reducing ferry emissions was echoed by a number of CEO's attending the conference.

"We depend on ports and they have to be involved.  The key message from this conference is that to reduce emissions our port partners need to come on board," said John Napton, CEO at Condor Ferries in the UK.

"We need a joint effort with port authorities and equipment manufacturers."

The firm, along with Siemens Energy, Toyota Tsusho and Associated British Ports, has won matched funding from the UK's Clean Marine Demonstration Competition for the project.