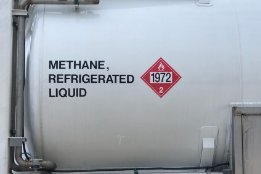 Gas bunker advocates SEA-LNG have criticized Maersk's favouring of methanol over LNG bunkers along with their wider comments on fossil bunker fuels, saying all carbon neutral synthetic fuels are "hundreds of billions of dollars" of investment and decades away.

With carbon neutral bunker fuel options such as ammonia and methanol not yet viable at large scale, the LNG lobby positions gas as an immediately attainable improvement over oil bunkers and a stepping stone to better alternatives in the longer term.

While LNG has been embraced by some some of Maersk's peers, such as CMA CGM who by 2024 look set to have a total of 44 LNG-fuelled ships in its fleet, Maersk has consistently played down the use of LNG.

Last year CEO Søren Skou said it would rather avoid using LNG because "it is still a fossil fuel" before last month calling for a global deadline to be set for banning the newbuild ships using fossil fuel-based bunkers.

Instead, Maersk is backing methanol to play a key part in its decarbonization plans, this year ordering nine vessels powered by the alternative fuel.

To its credit, Maersk has also made a diverse range of other investments in the decarbonization space, including in recent months investments in both electrofuels and lignin-alcohol bunker fuels, along with forming partnerships with the likes of China Classification Society (CCS) to explore a range alternative fuels and carbon neutral technologies.

However, SEA-LNG sees Maersk's apparent willingness to leave LNG in the cold as unjustified.

"[I]t is troubling that the CEO of a large carrier suggests that LNG should be banned from the maritime sector. His solution is to embrace methanol and accept the risk that sufficient green methanol production capacity can be developed for the industry, a massive challenge likely a decade or more away," SEA-LNG said in a press release today without naming Skou or Maersk directly.

"The same carrier admitted the supply constraint even for its own needs: 'We will have to be a little creative about where we bunker... when the supply of green methanol will be scattered in different places,'" it added, quoting without attribution comments made last month to S&P Global Platts by Maersk's head of decarbonization innovation and business development, Jacob Sterling.

Maersk is no stranger to criticism for its views on marine fuel technologies, not least because its status the world's biggest carrier means its choices are often viewed as precedent setting. In the run up to IMO 2020 its early stance against the adoption of scrubbers was seen by some as having stalled an eventual flood of orders for the tech.

Future Fuels All in the Same Boat

Methanol, along with ammonia and hydrogen, are currently seen as the leading contenders to dominate the future marine fuel mix.

The key barrier to such fuels being adopted is not the technology to build ships that can burn them, but rather producing sufficient quantities of these fuels to meet demand in a sustainable and commercially viable way.

In this regard, SEA-LNG says methanol and LNG find themselves with the same predicament.

"It is often overlooked that all synthetic fuels, such as synthetic LNG, green ammonia, and green methanol are derived from the same building block – hydrogen produced from electrolysis using renewable electricity," SEA-LNG says.

"Consequently, they all face the same challenge – the need for massive amounts of renewable energy that does not exist today. Hundreds of billions of dollars will need to be invested over decades before these fuels can be scaled to the level needed to serve the maritime industry."

The LNG bunker lobby has long argued that in the face of no better alternatives being available on the immediate horizon, transitioning to LNG now is the best course of action as it offers a superior emissions footprint to today's oil-based bunkers.

Critics argue that viable, better alternatives to LNG will emerge quickly enough to render the pursuit of gas bunkers little more than a distraction from the target of full decarbonisation.

Maersk are among a 150+ and growing group of industry heavyweights that believe full decarbonization of the marine shipping industry is possible by 2050.

30+ vessels in newbuild pipeline set to receive the systems from Silverstream Technologies.