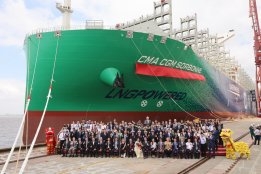 The company has now taken delivery of the CMA CGM Sorbonne, the latest in its series of 23,000 TEU giant boxships. Image Credit: CMA CGM

LNG bunker demand from French container line CMA CGM is set to rise further after it took delivery of the ninth of its giant new containerships powered by natural gas.

The company has now taken delivery of the CMA CGM Sorbonne, the latest in its series of 23,000 TEU giant boxships. By 2024 the company will have a total of 44 LNG-fuelled ships in its fleet.

The arrival of the ship will further cement CMA CGM's position as the largest buyer of LNG bunkers in the world, and that of TotalEnergies -- the company's main supplier -- as the biggest seller.

"These nine vessels present a host of innovations, the result of lengthy cooperation between CMA CGM's research and development teams and its industrial partners," the company said in a statement on its website.

"In addition to their LNG engines, the vessels feature cutting-edge technologies including a control deck with the latest onboard digital technologies to assist the Captain and crew, in particular during port maneuvers, as well as a narrow bulbous bow, and a redesigned rudder and propeller to make them more hydrodynamic, thereby reducing energy consumption."

CMA CGM is planning to make increasing use of bio-LNG rather than conventional fossil LNG in its fleet as it becomes available.