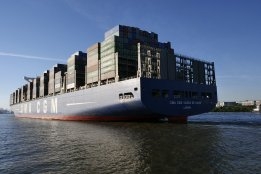 French container line CMA CGM may soon have a regular supply of bio-LNG at Marseiiles after a group of companies joined forces to produce biogas at the port.

CMA CGM, waste treatment firm EveRé, gas company Elengy and energy firm TotalEnergies are working together on a feasibility study for France's first bio-LNG production plant, to be built at the container hub in the south of the country. The gas would be produced from a waste treatment plant in the region, and would 'primarily' be used as fuel for CMA CGM's ships, the shipping company said in an emailed statement on Monday.

"The project fits perfectly into the local ecosystem, benefiting from the particularly well-suited and already existing infrastructure at the Grand Port Maritime, including EveRé's waste methanisation unit, Elengy's LNG terminals, which will be used for the storage and delivery of the BioLNG, TotalEnergies' bunker vessel, which will be located at the port as of January 2022, and CMA CGM's fleet of LNG-powered vessels," the company said in the statement.

"The feasibility study has been launched within the framework of this large-scale project, which corresponds with the national drive to promote BioLNG as defined in France's Mobility Orientation Law."

While fossil LNG is unlikely to be compatible with the shipping industry's decarbonisation goals over the longer term, the use of synthetic and bio-LNG could make gas a contender as a future bunker fuel in the coming decades.