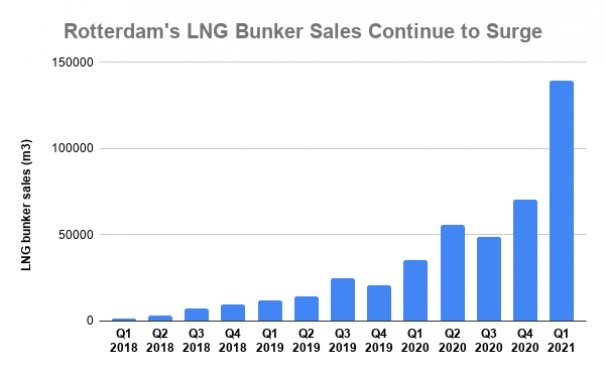 French energy producer Total currently controls more than 75% of the nascent LNG bunker market at Rotterdam, at present the largest hub for the alternative marine fuel.

The company has delivered more than 160,000 m3 of LNG at Rotterdam with its barge the Gas Agility since it commenced operations in November, the firm said in a statement on its website this week.

That amounts to 76.1% of the total 210,137 m3 supplied at the Dutch hub over the whole of the fourth quarter of 2020 and the first quarter of 2021, according to the latest data from the Port of Rotterdam.

The numbers show both Total's early dominance of the LNG bunker market because of its contract to supply CMA CGM's giant gas-powered boxships, and the overall small size of the market despite its prominence in discussions around marine decarbonisation.

LNG bunker demand is expected to continue to grow rapidly in the coming years, with companies across all shipping segments taking on new gas-powered tonnage. Demand at Rotterdam in 2020 was roughly ten times the level it had been two years before.

Assuming that rate of increase keeps up for a while longer, the total at Rotterdam may reach 2 million m3 by 2022, or around a fifth of current total conventional bunker demand at the port in terms of volume, although it should be noted LNG and oil bunkers have differing energy densities.

The question for suppliers is how long that growth will last, particularly in the face of increasing pushback from regulators on fossil fuels and a growing focus on zero emission energy solutions, and whether bio- and synthetic LNG can be supplied in sufficient quantities and at competitive prices soon enough before shipowners consider retrofitting vessels to use alternative zero-carbon fuels.

Planning for the introduction of those alternative LNG streams is something the leading independent physical LNG supplier Titan LNG has already put in place. Earlier this week the firm issued a development tender for a new LNG bunker barge set to be operational in 2023, the design of which includes separated tanks to segregate streams of fossil LNG and carbon neutral bio-LNG.

UECC backs the idea of aggressive emissions targets from the EU.

Unifeeder Takes on Biofuel at Rotterdam

Unifeeder is targeting 50% decarbonisation of its fleet by 2040.