By 2020 Ships Will Have Option to Desulfurize HFO Onboard to Meet 0.50% Sulfur Regs, Says Oil Tech Company 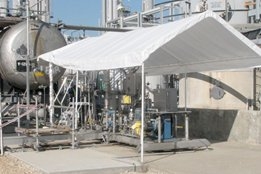 When the global sulfur cap on marine fuel lowers to 0.5% in 2020, technology will be available to allow vessels to desulfurize HFO onboard to meet the new regulatory requirements, Christine Gao, Managing Director at Canada-based International Ultrasonic Technologies Inc. (IUT) has told Ship & Bunker.

Currently, vessels are expected to install scrubbers if they want to continue burning the same HFO bunkers that they do today, while the majority of the world's fleet are expected to switch to burning more expensive low-sulfur MGO for compliance.

"This can be advanced into a workable solution for heavy products by 2020 for sure. It's something we've already begun to work on and over the next year, we're hoping to put together a partnership and working strategy to have this technology fully functional and ready to go for the bunker market by the time the rules change."

Gao said IUT first began looking at desulfurization technologies some 12 to 14 years ago.

"Today, a lot of companies are diluting to meet sulfur emission regulations, so we decided to shift our strategy and over the last couple of years have focused our efforts into adapting our technology for an area that hasn't really been heavily explored. With the new rules coming into effect, it makes sense to apply our technology to the heavier products," she said.

IUT says its technology works by taking an oxidant and a catalyst blended together with a higher sulfur raw fuel product, which then goes through an ultrasonic reaction chamber to speed up a reaction process that turns the sulfur into sulfones.

The sulfones can then be extracted via water wash, solvent extraction, absorption, or centrifuge.

"There are other entities working either on or towards the commercialization of various desulfurization technologies, including other direct competitors using the application of ultrasonics. But as far as I am aware, no-one is applying this kind of technology to this part of the barrel," said Van Wert.

We are totally confident we can hit 0.5% sulfur by 2020 and beyond that, down to 0.1% to make emissions control area (ECA) compliant products

"We also hold eight US patents on this technology, creating further barriers to entry into the marketplace for similar technologies; not to mention the fact that we already have a commercialized system in light products.  Most companies are still in the preliminary stages of proof of concept, so the competition's got a long road ahead of them before they catch up to us. Frankly, I don't see that happening for at least 3 to 4 years."

In terms of desulfurizing HFO bunkers, Van Wert says that in the lab it can currently take 3.8% sulfur 500 cSt product "down into the 2 range."

"We are totally confident we can hit 0.5% sulfur by 2020 and beyond that, down to 0.1% to make emissions control area (ECA) compliant products. The exact timeline for this depends on finding an interested industry partner and it could be advanced or stretched out depending on resources and demand."

Gao, meanwhile, said progress so far in the lab has been "very good and we have made tremendous strides as we work towards achieving our desired results."

"Once the bench testing has been completed and commercially validated, we will likely deploy a unit to a nearby terminal. That will be in approximately 3 to 4 months," she said.

The size and throughput of the units, a footprint of 20' by 6' to produce up to 3,000 barrels per day (bpd) for a single line - or around 400 metric tonnes (mt) - which can also be scaled up, is what makes the technology suitable for installation onboard vessels, said Van Wert.

"We see vessels holding higher sulfur fuel in one tank and then producing compliant fuel with our technology that is then stored in another tank, rather than the technology being installed as part of an in-line or on-demand setup," he said.

"But with ship-owners reluctant or unable to make investments in compliance technology, and refiners saying it will cost them too much to go into hydro desulfurization, the units would also be good fit for a bunker supplier looking to produce compliant product. The units are 'plug and play' insomuch that you can link two, ten, or however many of them together to produce 6,000 bpd or 30,000 bpd and so on, of product."

"This will be one-year ROI for ship owners," said Van Wert, "and from an operational perspective, like a scrubber, when installed onboard a vessel you would have to retain the extracted sulfur wash-water until you reached an environmentally sound disposal point.

"Advantages over scrubbing include only requiring one unit to keep a vessel compliant, which could be an investment deciding factor for vessels that have engine setups requiring multiple scrubbers. And because you're producing compliant product upfront and using that, unlike a scrubber, in the event of maintenance or malfunction you can stay compliant."

For further details IUT can be reached as follows: