War of Words Over LNG Bunker GHG Performance Heats Up 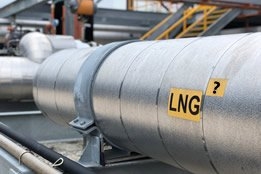 The debate over the merits of LNG bunkers is heating up. Image Credit: Ship & Bunker

In what is becoming an increasingly polarizing debate, Transport & Environment (T&E) last week blasted Europe's rollout of LNG for shipping as a "$22 billion distraction" after a study it commissioned suggested the reduction in ship-related GHG's would be just 6% by 2050 compared to diesel.

While it didn't make mention of the T&E study directly, SEA\LNG today said assessing LNG purely from a GHG point of view "is not responsible" as it ignores the fact natural gas reduces other harmful emissions and there are currently no realistic alternatives for Marine.

realistic reductions of up to 20% are achievable now with LNG

"As regards GHG in the maritime sector, realistic reductions of up to 20% are achievable now with LNG," it said, adding that this would represent a "major step forward to reduce GHG emissions" for the Shipping industry.

SEA\LNG seemingly also took issue with how the investment in LNG bunkering infrastructure had been represented, stating: "It should also be noted that the infrastructure for LNG supply is already there; the focus is on investments in the 'last mile' – getting the LNG from the bulk LNG terminals to the ship."

A key issue in assessing LNG's GHG performance is that determining precise levels of methane slip and factoring in other fugitive emissions, for example during the bunkering process, is both subjective and currently unclear. In fact T&E's figure of 6% is actually fairly generous by critics' standards, with some insisting it might actually be worse than simply sticking with HFO.

For the record, SEA\LNG's figure of 20% is also on the conservative side, with some believing the savings are upwards of 30%.

Alternative fuels such as hydrogen and ammonia are not economic, not available at scale, and unproven for shipping operations. They are called future fuels for a reason!

What is not in question is LNG's performance on other emissions, including the fact that LNG emits zero sulphur oxides (SOx) and virtually zero particulate matter (PM), as well as achieving a reduction in nitrogen oxides (NOx) emissions of about 90% compared to HFO.

Appreciating this is vital in LNG's case for adoption, SEA\LNG says.

"We must consider the significant public health benefits LNG can and is delivering now through significant local emissions reductions in markets where it is being utilised," it said in today's statement.

"Electrification, batteries and hybrid solutions on the other hand may be viable for certain specific short sea, harbour or ferry type operations but this represents an almost infinitesimal portion of the world's vessel fuel consumption," it said.

"Today, LNG is the only scalable and economic alternative fuel available for the vast majority of deep sea ocean shipping. Alternative fuels such as hydrogen and ammonia are not economic, not available at scale, and unproven for shipping operations. They are called future fuels for a reason!"

T&E's counter argument is that investment should instead be made to develop those alternative solutions, and investing in LNG now will only make it harder to move away from LNG once better performing solutions are developed.

That all said, the lack of clarity over LNG bunker's GHG performance is well understood by SEA\LNG, with Chairman, Peter Keller recently saying "there are still many open and important questions relating to the global warming implications of methane emissions in natural gas production and transportation as well as methane slippage in marine engines."

The group is currently working with other stakeholders to produce a full "well-to-wake" lifecycle analysis of GHG emissions of LNG-fuelled propulsion systems.

Minerva now has five barges operating in Singapore, and will within the next two weeks be receiving a tanker it has bought to act as floating storage in the are.