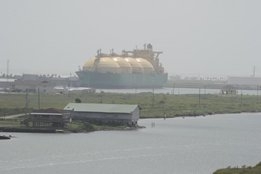 To date Europe has spent half a billion US dollars on LNG infrastructure for refuelling ships. Image Credit: Bob Pearson / Greenpeace / T&E.

Rolling out liquefied natural gas (LNG) infrastructure for shipping in Europe would be a "$22 billion distraction" that would only provide, at best, a 6% reduction in ship greenhouse gas emissions by 2050 compared to the replaced diesel, according to a new study for Transport & Environment (T&E) by the UMAS consultancy.

To date Europe has spent half a billion US dollars on LNG infrastructure for refuelling ships, T&E notes.

The case for LNG bunkers has been enjoying considerable momentum this year, with a number of global players backing it to be the industry's preferred post-IMO 2020 bunker fuel.

With SOx and PM emissions all but zero, and a reduction of NOx by up to 90%, burning LNG offers considerable advantages over conventional oil-based bunkers. This is something that all parties can agree on.

LNG is not a bridge fuel, it's an expensive distraction

Many believe this makes LNG a vital "bridge fuel" to help reduce emissions until lower and, ultimately, zero emission solutions can be developed.

T&E disagrees, saying LNG's performance on GHGs means it will only make the decarbonisation of shipping an even more challenging transition for the industry.

"LNG is not a bridge fuel, it's an expensive distraction that will make it harder for the EU to achieve its shipping climate goals and reduce gas imports from places like Russia," says Faig Abbasov, shipping officer at T&E.

"Europe should back future-proof technologies that would deliver the much greater emissions reductions that will be needed, including port-side charging or liquid hydrogen infrastructure. This means the EU needs to stop mandating LNG infrastructure in European ports."

The Shipping industry this year at MEPC 72 pledged to reduce its GHG emissions at least 50% by 2050 compared to 2008, and move towards phasing them out entirely.

A key reason LNG's performance on GHG emissions has opinion so divided is that it remains unclear as to exactly what it contributes to the GHG reduction effort. Some believe that compared to burning HFO the GHG reduction LNG affords is as much as 30%. Others say that once the full lifecycle is taken into account the saving amounts to zero or worse.

Even Peter Keller, Chairman of LNG bunker advocacy group SEA\LNG, last moth acknowledged that "there are still many open and important questions relating to the global warming implications of methane emissions in natural gas production and transportation as well as methane slippage in marine engines."

The latest UMAS study says its calculation of 6% GHG savings does not take into account a recent US study that found methane slippage rates are 60% higher than previously estimated.

The UMAS study also warns that, if Shipping meets its intended GHG reduction goals, there will be a switch to zero-emission technologies including hydrogen, ammonia and electric propulsion in order to decarbonise. Significant LNG assets including feeders, barges, and storage tankers will then likely become stranded by 2050.

"There is an uncertain future demand for LNG as a marine fuel over the next 10 years. On the one hand, it is an option for complying with the 2020 sulphur cap, but as it cannot enable the GHG reductions that have been committed to in the IMO's initial strategy for GHG reduction, and the Paris temperature goals more generally, it is clear its role in shipping's transition to a low-carbon future can only be transient," said Domagoj Baresic, consultant, UMAS and PhD researcher, UCL Energy Institute.

UMAS' study, LNG as a marine fuel in the EU, can be downloaded here: https://www.transportenvironment.org/publications/lng-marine-fuel-eu

The firm tested a 30% biofuel blend on board the tanker Fure Valo on a round trip between Mongstad and Reykjavik.