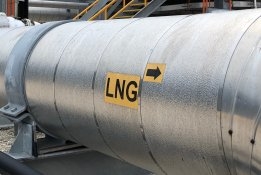 The so-called "well-to-wake" study conducted by Thinkstep was released earlier this year by LNG bunker advocates SEA\LNG and The Society for Gas as a Marine Fuel (SGMF).

Its headline conclusion is that LNG can produce lifecycle GHG savings of between 7% and 21% compared to current oil-based bunkers.

While a full response to the claims is still being prepared, it has been confirmed to Ship & Bunker that the basis of Lindstad's calculations will themselves be challenged.

SEA\LNG says that chief among the issues is that Lindstad's work does not factor in that the 2–stroke engines most suitable for LNG are used by the majority of deep-sea trade.

He argued that not only is slow steaming a temporary phenomenon for certain sectors, there is also a trend to fit vessels with smaller engines operating at higher loads.

Some 55 suppliers were licensed at the port at the start of 2019.