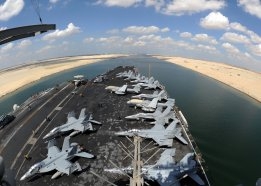 The Ever Given blocked the Suez Canal for several days in March. File Image / Pixabay

The grounding of the 20,000 TEU container ship that blocked the Suez Canal in March may have been because of its speed and rudder design, according to the local authorities.

The Suez Canal Authority believes the Ever Given was travelling at too high a speed when it became grounded, news agency Reuters reported on Thursday, citing comments from Osama Rabie, the authority's chairman.

The ship was travelling at about 25 km/hour, compared with a normal speed of 8-9 km/hour for the canal's southern channel, Reuters cited Rabie as saying.

The authority also said the rudder was not aligned, and that its size was not appropriate to the size of the ship.

The authority is seeking compensation of $550 million from the vessel's owners. Reuters reported the owners have offered $150 million.

Clarence Chang Peng Hong, who was sentenced to four and a half years by Singapore court, is to lodge an appeal.

On Tuesday the company announced it was moving its chief operating officer to Dubai.

The Thun Equality was built by Scheepswerf Ferus Smit in the Netherlands.