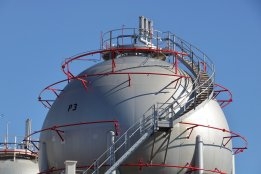 A new report by UCL Energy Institute has taken another swipe at LNG bunkers, this time warning that the rapid growth in LNG-fuelled ship orders this decade could result in hundreds of billions of dollars being left tied up in stranded assets.

The institute published its new research Tuesday, 'Exploring methods for understanding stranded value: case study on LNG-capable ships", assessing the LNG-capable fleet could have a "total 'value at risk' of ~$1trn ($850bn) by 2030".

The research, led by Marie Fricaudet and co-authored by Dr Tristan Smith, argues that while LNG-capable / LNG dual-fuel vessels ordered today are more expensive than their fuel oil-only equivalents, in the future their value will be reduced to match that of similar aged conventional vessels designed to use fuel oil only.

The reduction in value will be driven by policies that disincentivise fossil fuel use and encourage zero emissions shipping.

How concerned shipowners should be over that reduction in value will depend on the speed that such policies will actually be realised relative to the lifespan of a vessel.

The report considers that if Shipping is to achieve its commitments to the Paris climate agreement then such policies are put in place by the end of this decade.

"As this decade proceeds, we will continue to experience more and more severe impacts from climate change. This will further grow pressure both in markets (ESG) and policy negotiations to align assets to a rapid shift to zero emissions," added Smith, who is also Associate Professor at UCL Energy Institute.

The report authors further calculate that the potential stranded value would be reduced to $129-210 billion, or 15-25% of the ships' value, if the ships retrofit to run on zero-emission hydrogen-derived fuels as these become available.

"This report is a first attempt to extend the research on stranded power generation assets and unburnable fossil fuel reserves to the shipping sector," Marie Fricaudet, the report's lead author and PhD student at UCL Energy, said in an emailed statement on Tuesday.

"The findings highlight that the risk of stranded assets is also very material in the shipping sector.

"The longer we leave the LNG transition running and then switch, the more painful it will be and technology lock-in during this crucial decade will create more resistance to change later."

UCL Energy Institute is well known for its stance against LNG bunkers as part of the long running debate on LNG bunkers, and it drew particular attention last year for a report critical of the emerging alternative fuel it released in conjunction with the World Bank that prompted a number of counter claims from LNG advocates, including from LNG bunkering players Shell and Titan.

The headline messages from supporters of LNG bunkers are that it is the best and only real alternative to oil bunkers today, and that ships currently running on fossil LNG will transition to using bio- and synthetic LNG over the coming decades as production of these alternatives is increased.

However, these alternatives will presumably still involve some level of net GHG emissions through methane slip unless they are used in conjunction with carbon capture systems.

The latest report also assumes that bio- and synthetic LNG will not be competitive on price with zero-carbon fuels like ammonia.

If nothing else, the report highlights the difficulty shipowners have in balancing the pressure to act on emissions today with the need for commercially viable, zero emissions solutions for the long term, and even Smith concedes that "the best solutions for zero emissions international shipping are still emerging."

Still, his position that "it is already clear that LNG-capable shipping is not well positioned and faces a higher risk of stranded value during the transition" to zero emissions solutions should not be dismissed.

While some in the industry may see IMO's current GHG reduction targets as affording them plenty of time to invest in interim solutions, if the growing number of calls from within the industry itself urging full decarbonisation of Shipping by 2050 is any indication, those IMO targets could well be changed.

The firm is looking for candidates with several years of solid sales and trading experience.