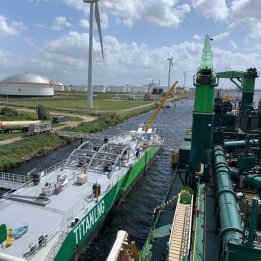 The comparison of LNG to other alternative marine fuels suffers from insufficient well-to-wake analysis of ammonia and hydrogen, according to gas bunker supplier Titan LNG.

Niels den Nijs and Michael Schaap, respectively CEO and commercial director of Titan, published a statement on the company's website on Friday responding to the World Bank's recent criticism of LNG as a bunker fuel.

The World Bank has sparked a debate on LNG this month by publishing research in conjunction with UCL's University Maritime Advisory Services (UMAS), led by Tristan Smith. The World Bank report reiterated that team's longstanding view of LNG as a dead-end for the shipping industry that wastes resources that could better be spent on zero-carbon fuels.

"But, for me, ammonia is a gamble – and one not for the faint-hearted.

"Hydrogen has many challenges, and we see this more used as a building block for E-fuels like E-LNG and methanol, but there are a whole range of safety, environmental and technical issues to be addressed before these, or any other, alternative fuels and technologies are ready for use in the marine environment, let alone that marine fuels will have to compete with other sectors like aviation and road transport.

"Not to mention the trillions of dollars estimated to construct the full infrastructure required for them."

There is a mismatch between the amount of analysis that has been done on the environmental case for LNG versus other alternative fuels, the executives argued.

"Hydrogen is highly flammable and will permeate through just about anything, and ammonia is extremely toxic with the effects of "ammonia slip" yet to be considered," they said.

"These attributes have significant implications for vessel operations, safety aboard vessels and in port communities, and public acceptance.

"Circumnavigating these extremely challenging issues will be high-cost and high-risk.

"There has been no comprehensive well-to-wake analysis performed on either of these alternative fuels, as there has on LNG.

"Without these studies, how can we effectively compare the long-term environmental attributes of these or other alternatives?"