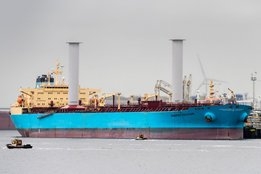 The trial onboard Maersk Pelican, announced last year, ran from from 1 September 1, 2018 to September 1, 2019 and saw the vessel operate in conditions ranging from tropical climate to arctic conditions in Europe, Middle East, Asia and Australia,

The savings were verified by Lloyd's Register, Maersk Tankers and Norsepower said in a joint statement released today.

While the reduction was not expressed in dollar terms, they were said to be equivalent to approximately 1,400 tonnes of CO2.

Given around three tonnes of CO2 are produced per one tonne of bunkers burned, it suggests 467 tonnes of bunkers were saved over the course of the year. Ship & Bunker data puts the average price for IFO380 in major ports during that period at $433/mt, indicating the savings in dollar terms were some $200,000.

Tommy Thomassen, Chief Technical Officer at Maersk Tankers, says the trial results are strong enough for it to have decided to continue sailing Maersk Pelican with the Rotor Sails onboard.

"We will closely follow the development around the financial and commercial viability of the technology for potential future installations on some of our other larger vessels," he added.

Rotor Sails are a wind-propulsion technology that uses spinning columns to provide propulsion via the Magnus Effect.