Buying bunker fuel generally means getting the best price while trying to avoid claims. However, not all bunker fuel is the same, particularly with regard to how much energy is produced when the fuel is burned and the mileage that can be achieved on a load of bunker fuel.

There is a very strong relationship between density and calorific value

Ash varies within a very narrow range, generally from 0% to 0.1% for residual grades and 0% to 0.01% for distillate and has a very limited impact on calorific value. 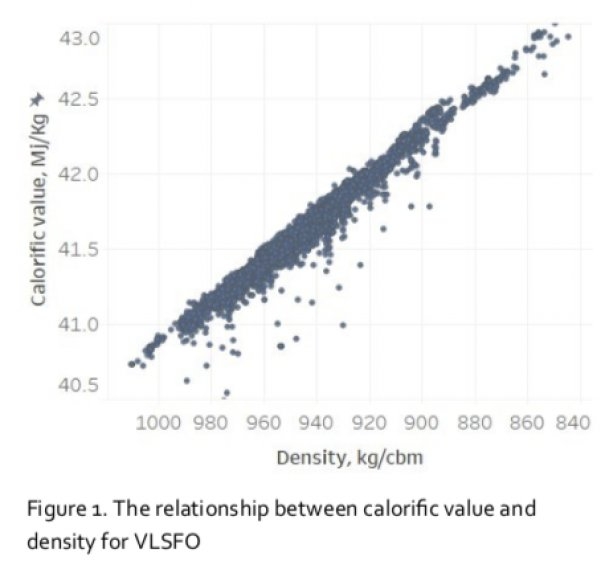 While water can range from 0% to 0.5% for residual fuels and should not be present in distillate fuels, its impact on residual fuel calorific value is also limited. This leaves density.

Figure 1 shows the relationship between density and calorific value for VLSFO, so it can be concluded that density plays the major role in determining the calorific value of the fuel.

LSMGO has the highest calorific value, followed by VLSFO and HSFO and the difference between these is substantial

This relationship is inverted, which means with the increase in density calorific value decreases.

Following from this, LSMGO has the highest calorific value, followed by VLSFO and HSFO and the difference between these is substantial.

The same logic applies to the price, where, on the energy basis, VLSFO becomes uncompetitive if it's less than 3% cheaper than LSMGO. Assuming LSMGO is priced at $650/ mt, VLSFO on average will lose its competitiveness at $630/mt and above. 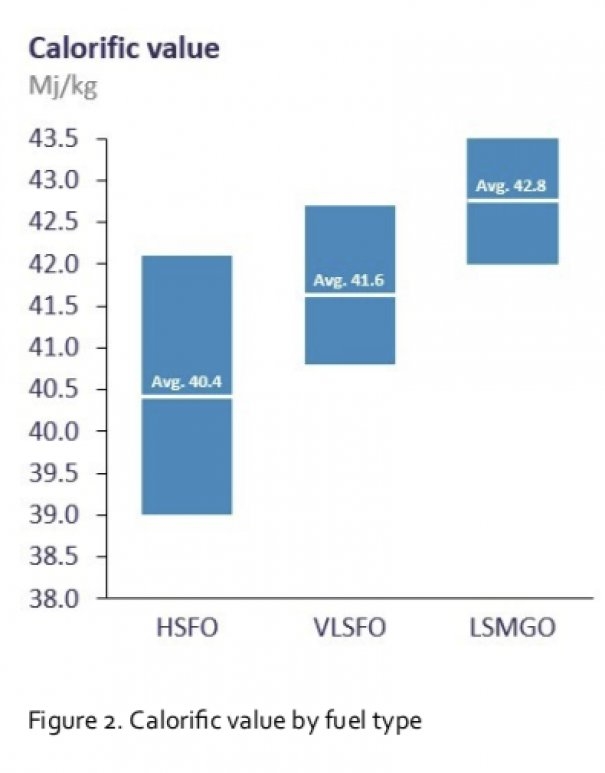 In many cases, taking a bottom quartile VLSFO (41.0 Mj/kg) and comparing it with a top quartile LSMGO (43.2 Mj/kg), will indicate the minimum price difference beyond which VLSFO will almost always be cheaper than LSMGO. Such a price difference is around 5.5%, so it can be said with a great degree of certainty that unless VLSFO is 5.5% or less cheaper than LSMGO, it should be competitive.

As seen from Figure 2, calorific values typically vary and change from one fuel batch to the other, often within the same port and supplier. Therefore, it is important to be able to compare LSMGO and VLSFO prices adjusted by calorific value at the point of buying the fuel.

Integr8 Fuels does it by requesting the certificate of quality (COQ) from the supplier and calculating the price per energy unit ($ per Mj/kg) in order to ascertain the cheapest fuel grade.

Figure 3 shows one such example of comparing VLSFO and LSMGO quotes on calorific value.

In this case, VLSFO, despite being $20/mt cheaper than LSMGO, was actually more expensive per unit of energy. On top of this, unlike VLSFO, LSMGO can be easily mixed with the existing distillate fuel onboard and this also plays in favour of buying LMSGO in this case.

Lastly, from analysing thousands of tests, VLSFO blends tend to have paraffinic components, which generally increase its pour point. For LSMGO pour point is typically below 0 deg. C, so heating is rarely required for storing it in vessel's bunker tanks, while for VLSFO pour point typically ranges between 6 deg. C and 30 deg. C. In order to maintain VLSFO in the tank at 10-15 deg. C above its pour point, heating is often required. Heating bunker fuel requires additional fuel consumption.

On a 20 day laden Aframax passage that consumes around 700mt of fuel, it is estimated that VLSFO with the 25 deg. C pour point will require around 10 additional tons of fuel to maintain the correct temperature in the storage tanks, increasing consumption by around 1.5% compared with the fuel that does not need heating.

Figure 4 shows the influence of such difference on the calorific value of the fuel, which further lowers its competitiveness with LSMGO. In this case VLSFO starts to compete with LSMGO (priced at $635/mt) at $604/mt and below—that is over $30/mt difference!

The importance of buying bunker fuel on the energy basis is growing and Integr8 Fuels have invested heavily in data, analytics and systems that give our customers the ability to not only pick the best fuel type depending on the quoted price, pour point and calorific value, but also select the best quote from different suppliers for the same fuel grade. 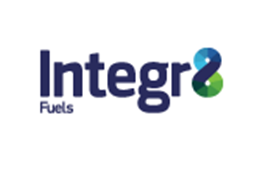 The new icebreaker will replace Norilsk Nickel's Taimyr-type vessel, which will be decommissioned in 2027-2029.

Lignin-Alcohol Bunker Blends Still on the Cards for Maersk

Maersk mooted the idea earlier this year of blending lignin with methanol or ethanol to produce a low-carbon bunker fuel blend with a higher energy density than the alcohols would have on their own.