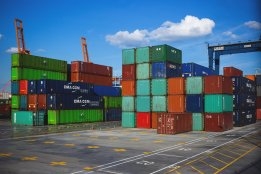 Almost all of the top boxship firms have slimmed down their operations this year. File Image / Pixabay

All but one of the world's top container lines have cut capacity this year in response to the COVID-19 pandemic, according to shipping intelligence service Alphaliner.

Eleven of the top twelve carriers have reduced their overall fleet capacity in the first half of 2020, Alphaliner said in its weekly research note Tuesday.

Maersk saw the biggest reduction since the end of last year, reducing its capacity by 236,000 TEU, the company said, while HMM was the only one of the twelve that grew over the six-month period.

"Typically, the cuts were in low single digits, but in two cases they reached a very notable -10.7% and -14.0%, respectively.," Alphaliner said.

"The shipping lines reacted to lower cargo demand due to the COVID-19 pandemic, mostly by redelivering chartered tonnage to their owners."

Container lines are the largest consumers of bunker fuel within the wider shipping industry. Demand from them has started to recover after dropping sharply earlier this year, but is not expected to return to previous levels for several months.

The company is looking for candidates with a relevant education, fluent English and experience in shipping or sales.