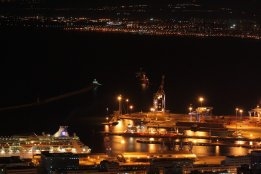 The port of Haifa. File image/Pixabay.

A survey of ship emissions conducted for Israel's environment ministry has concluded that ship calls to the ports of Haifa and Ashod are responsible for 6% to 15% of all emissions hazardous to human health in Israel.

According to the survey, the annual quantities of emissions from Haifa, as of 2018, came to 11,000 metric tonnes of nitrous oxides and 9,000 mt of sulfur oxides. Emissions from Ashdod last year were smaller by about a third, according to local news provider Haaretz.

The global cap on sulfur in bunker will fall from 3.5% to 0.5% on January 1 while the momentum behind making the Mediterranean area into an emissions control area is gaining ground. The sulfur cap on fuel used by ships in an ECA is 0.1%.

Position based in Singapore.

Vessel chartered from Mitsui OSK to be based in Fos.