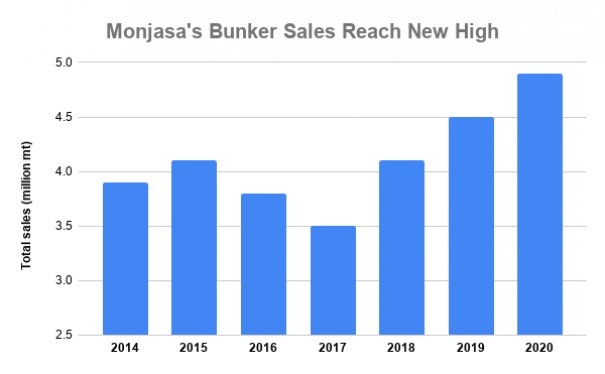 Marine fuel supplier Monjasa saw an 8.9% gain in its bunker sales volumes last year and a 13.2% rise in profits, despite a significant decline in the global market, with growth in Singapore and Panama the biggest drivers.

"The year commenced with a successful IMO 2020 transition to more environmentally friendly marine fuels across the oil and shipping industries," Monjasa said in the statement.

"The remainder of the year was characterised by disrupted maritime trade flows following the evolving COVID-19 pandemic.

"As a direct consequence, the global market for marine fuels decreased substantially.

"Despite this overall development, Monjasa's services and products were more in demand than ever and Monjasa recorded an increase in volumes in each month of 2020 compared to 2019 levels."

Bunker volumes at the world's largest hubs dropped by 6.3% on average last year, according to Ship & Bunker's quarterly survey in conjunction with BLUE Insight.

Monjasa's sales growth was boosted by its activities in Southeast Asia 'and particularly in the Port of Singapore', it said in the statement, with sales in this region gaining 80% on the year to 900,000 mt.

Singapore's total sales climbed by just 5% last year, according to data from the Maritime and Port Authority.

In the Americas Monjasa saw a 22% increase in sales volumes to 1.4 million mt.

This was "led by high activity levels in the Panama Canal and across the US," the company said.

Total sales in Panama sank by 11% last year, according to the Panama Maritime Authority.

"To which extent this will impact the overall maritime industry and Monjasa is still unknown, however, Monjasa remains confident of another positive financial result in year 2021."

The company is looking for candidates with at least five years of experience in customer-focused oil or bunker trading or the maritime industry.

OOMCO is in the process of developing a new bunker facility at Duqm with 30,000 m3 of storage capacity and blending facilities for both fuel oil and distillates.