The Road to Zero: Interest Builds in Carbon Capture as Marine's First Onboard Trial Announced 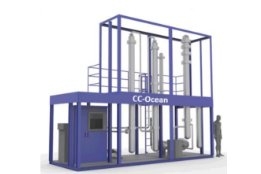 Kawasaki Kisen Kaisha, Ltd. ("K" Line) today announced what could be the first marine-use trial of a CO2 capture plant on-board a vessel.

The two-year "CC-Ocean" - Carbon Capture on the Ocean - project kicks off this month with Mitsubishi Shipbuilding set to develop and construct a small-scale CO2 capture plant for land-based testing in mid-2021.

Marine trials are anticipated to then take place on "K" Line's thermal coal carrier Corona Utility by the end of FY 2021.

"This project will not only verify the efficacy of capturing and storing CO2 from a vessel's gas emissions, but also the operability and safety of CO2 capture facilities at sea," "K" Line said in a press statement released today.

The goal is to achieve net zero emissions onboard vessels, it added.

The captured CO2 is expected to be used as part of  Enhanced Oil Recovery (EOR) processes or as raw material in the production of synthetic methanol fuel.

Interest in carbon capture comes as the industry looks to reduce its emissions as part of the IMO 2030 and IMO 2050 targets, with IMO having set an ultimate goal of reducing GHG emissions completely by the end of this century.

On-board capture of carbon is already being explored by a number of other shipping companies and industry stakeholders, including NYK, Sovcomflot, and Ardmore as part of the DecarbonICE project announced last year, while earlier this year UK firms Houlder Ltd. (Houlder) and PMW Technology announced a partnership to explore the use of carbon capture technology within the marine space.

However, "K" Line is so far the first to table a firm path for marine trials of the technology onboard a vessel.

Carbon capture is attractive to many industry stakeholders as it would allow the ongoing use of existing fuels and bunkering infrastructure, reducing much of the cost and risks associated with transitioning to new marine fuels with a lower-to-zero carbon footprint.

"The commitments made by the IMO for radical reductions in shipping emissions by 2050 will require major changes to fuels and vessel design. Current renewable fuel favourites such as hydrogen and ammonia will require global investment estimated to exceed $1 trillion," Paul Willson, Director of PMW Technology, said earlier this year.

"Carbon capture from marine engines offers shipping the opportunity to avoid the huge cost of new fuel production and delivery systems, as well as retention of existing vessel and current high-performance engine designs.

In addition to placing carbon capture technology on-board a vessel, "direct air" carbon capture systems can also be employed. These land-based plants are less efficient than the on-board equivalents as they do not have the benefit of operating at the source of CO2 emissions. However, land-based plants do not have to meet the challenge of operating complex machinery at sea, managing the roll-out of installing plants on every vessel, nor do they have a requirement for on-board storage and management of the captured carbon.

The technology is also surprisingly mature. Even in 2018, Carbon Engineering (CE) - the operators of a demonstration direct air carbon capture plant in Canada - estimated a total cost of $100-$150 per tonne of CO2 captured. This translates to a premium of $300-$450/mt on current bunker costs to make them carbon-neutral.

"We've always known we can capture CO2 from the air because we do it on spaceships and submarines. The question is at what cost can we do it on an industrial scale and can we compete to have a useful place alongside all the other options to reduce emissions and address climate change? We think the answer is yes," CE's Geoff Holmes says.

Perhaps the biggest barrier to using carbon capture to achieve IMO 2030 and IMO 2050 targets are political in nature.

For one, environmental groups who have discussed the technology with Ship & Bunker have said they do not believe carbon capture would satisfy the IMO 2030 or IMO 2050 goals as they are currently worded, with a source at one NGO describing it as "a complete non-starter."

relying on carbon capture technology would be a costly gamble

"The target is to reduce the emissions being produced, so capturing them afterwards would not satisfy this requirement," they said.

There is also concern that backing carbon capture would prolong the use of fossil fuels and delay investment in the development of cleaner sources of energy.

Indeed, the European Environmental Bureau (EEB) - who bills itself as a Europe's largest network of environmental citizens' organisations - last month said Europe's hydrogen strategy was "a gift to fossil fuel companies" in part for its reliance on the use of carbon capture technology.

"While useful in a supportive role to reduce emissions in the short-term, relying on carbon capture technology would be a costly gamble – one that would keep Europe dependent on gas imports from countries such as Russia and the US and delay the transition to climate neutrality," it said.

But PVM suspects the pull-back may be short-lived.