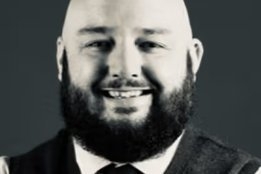 Left-field as this may sound, I'd like to talk about today about the future. I don't mean in the way those investment guys do when they cold-call you to ask if you have a UK pension you want to give them to waste.

I mean, about predicting the future.

There is a common phrase we all know – 'If I could predict the future, I'd be a billionaire'. Well, true as that might be, everyone in bunkering has to do it professionally. And it is a tough thing indeed to do. Allow me to indulge in some retrospective comparisons. Let's go back ten years if you will, back to 2012.

A party hardliner named Xi Jinping becomes the new president of China and was immediately busy sorting out the aftermath of the swine flu pandemic to ensure it never happened again. In what was then known as the Kharkiv Pact, Russian President Dmitry Medvedev and Ukrainian President Viktor Yanukovych had just signed an agreement in which Russia agreed to a 30% drop in the price of natural gas sold to Ukraine in exchange for a 25-year extension of the lease to Russia of the Ukrainian Black Sea naval base at Sevastopol.

OW Bunker were one the largest bunker trading organizations the world had ever seen and we were starting to hear some whispers that they might in fact be going ahead on their long-mooted IPO, which would surely take them stratospheric and change bunkering forever. Chelsea had just won the Champions League, becoming the first London club ever to win the European Cup. I was married and training for the London marathon. I had (some) hair.

Xi Jinping is very much still leader in China. He is still dealing with pandemics. Ukraine and Russia are, to put it diplomatically, not friends any more although Russia is still using Sevastopol. OW did indeed change bunkering for all of us, but not in the way many of us could have predicted. Chelsea are still the only London club with a European Cup, only now we have two. As for the marathon training and the hair… and the marriage… well.

A lot has changed, and how much of it could we have predicted?

The OW collapse continues to haunt us all.

The OW collapse continues to haunt us all. It remains probably the single most important event in bunkering history and affected all that we do in so many ways that even eight long years later there are still lawsuits going on. It was bunkering's 9/11, its JFK moment – the day you remember exactly where you were when the news started coming through. I remember the jokes on the trading floor about how it couldn't possibly be serious in the morning, and them stopping abruptly around lunchtime. I remember going home in the evening reasonably sure that my current employer was going to be ok but feeling pensive having spent an hour prepping a briefing for the company owners on who of our trading peers would be at some risk, who we would need to zero and who we need to start arresting vessels for. Grim.

I didn't see OW coming. But I was right about one thing. Nothing was ever going to be the same for any of us after OW.

Being in bunkering, running a bunker company, has become an order of magnitude more difficult than it was even five years ago, let alone ten. OW and the subsequent much-lamented train of bunker collapses since them have eaten away at the wider faith in what we do to the extent that only the committed financiers, credit insurers and banks who really engage with and understand what we do, will invest in or support bunkering any more. Part of that has been our previous focus on fossil fuels as well. So a lot of financing capital has exited the sector and that that remains is a lot more expensive and more difficult to obtain than it was. Bunkering has become a difficult word for some banks who are unwilling or unable to see the strides the vanguard of the industry are making in terms of benchmarking, understanding risk and increasing transparency.

Compliance was something other people did, back in 2012.

The life of the credit manager has evolved too in the interim. Compliance was something other people did, back in 2012. It is arguably the most important part of my job now.  In fact that was the case even before Russia invaded Ukraine. It is nothing less than the cornerstone of bunker risk now.

My job used to be assessing credit and approving requests as they come in, plus managing the husbandry of limits and reviews and so on. It is now a far broader position; a risk double whammy of credit default and sanctions compliance where even one slip could be catastrophic for the entire company. It is about ensuring our policies are as transparent and forward-facing as they can be and ensuring all our financiers and stakeholders are kept fully appraised and advised on these, because they change so dynamically. We have had to become experts (and fortune-tellers) in geopolitical risk analysis and the global financial markets alongside just knowing shipping.

At the beginning of this editorial, I alluded to the fact that we are all fortune-tellers now. I stand by that.

All of us need to be able to tell the future, be it five minutes or five years ahead.

I think we all are. Traders, risk, ops, management, compliance, even HR these days. All of us need to be able to tell the future, be it five minutes or five years ahead, to a reasonable degree of accuracy -- or at least play the averages. I've been a credit manager for 12 years now and I know all my fellow credit managers well, and am great friends with most of them. I've never met a credit manager who likes a flutter on the horses or goes anywhere near the blackjack tables when we go to Vegas. I think this is because we attune ourselves to the odds on things and we like to be able to predict what is happening. We are all natural analysts.

I know what you are thinking.

Go on then Morgan. Tell us. What does the future hold? What are the signs saying?

So to drill down on these a little:

Bunker companies have been talking the talk on bigging up their environmental credentials for many years now but how many are actually walking the walk?

On the environmental side, bunker companies have been talking the talk on bigging up their environmental credentials for many years now but how many are actually walking the walk much past a few lip-service posts on LinkedIn? Delta Energy is at the very forefront of a drive toward greener fuels in bunkering, be that through biofuels or reduction of greenhouse emissions in a real, practical sense alongside trading of carbon credits to provide the social, economic and health benefits to some of the poorest areas of the planet. We are CO2-neutral. We will continue to invest in this side of the business not because it is profitable, but because it is quite simply the future.

As for default risk, well this is something that has been a key enemy since we started selling coal bunkers on credit terms almost two centuries ago and actually things have not gotten much better in that time. We still aren't asking enough pertinent questions of our counterparties, we still aren't getting enough pertinent answers back when we do ask, and there is still no defined KYC procedure that the whole industry works to.

It is my hope that we will come closer together as an industry and start tackling the credit problems we are beset with. Firstly by adopting a common rating system as a start, secondly by working with the credit reporting agencies to tailor their offerings more to what we need now in 2022, which is app-based platforms, real-time information, there and then, etc. We might also consider looking at setting up a framework of a credit policy for IBIA and the Marine Fuels Alliance to push to their members to get the ball rolling on what constitutes best practice in bunker credit and sanctions compliance.

In the absence of someone inventing a crystal ball to tell the future, we also have to become more tech savvy. Some bunker companies have developed online trading platforms and others have invested in buying these off the shelf and adapting them to their needs. We at Delta have formed a fairly well-known joint venture called Delta Connect, for what we believe is the premier online bunker trading platform that works across both trading and brokering modes and also handles the back office and requests mechanisms. That takes care of the digitalization push for us, but obviously there is more. We can look at a cloud-based solution to filing BDNs and such, and I know a few bunker suppliers are doing this now. But what else is there? What else can we do?

So if we can digest all this down to then try to visualize a bunker company of the future, what might it look like, do we think?

So there you have it. Granted, this is more of a wish list than a glimpse into the future, that we look at more with hope than expectation.

The future may in fact be dictated by the major players and their leadership and processes because of the consolidation that we have seen recently.

The truth is the future may in fact be dictated by the major players and their leadership and processes because of the consolidation that we have seen recently, coupled with the never-greater barriers to access for new entrants.

The number of actual bunker traders is likely to go down; I think most will agree.

So as my employer, Delta Energy, prepares to make its next strides into its next exciting stages of development, so we can afford to look around us with a mindset of not having to do things the same way everyone does them just because. Not to disrupt necessarily, but to improve – with honesty, transparency and an eye on the future. This is what gets me and the rest of our management team out of bed in the morning. Because if you aren't improving things, through thought or action, if you aren't trying to make things better for everyone, then why are we here at all?

BUNKER JOBS: Credit Manager for Bunker Holding Group in the US

Based in either Houston, Stamford or Florida you will be accountable for the entire credit assessment process in the North- and South American time zone.

The partnership will see Windward providing educational sessions to MFA members and offering a bespoke package of AI-powered solutions.