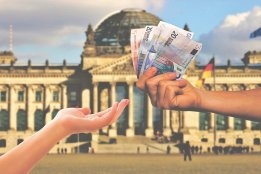 Charging the shipping industry for its emissions may be the way to kick-start decarbonisation. File Image / Pixabay

Commodity trading firm Trafigura has set out a detailed proposal for a global levy on carbon-intensive bunker fuels to assist with the shipping industry's efforts to eliminate its carbon emissions.

The company proposes a carbon levy of $250-300 per tonne of CO2 equivalent is imposed on bunker fuels, "in order to make zero- and low-carbon fuels more economically viable and more competitive."

"Trafigura proposes that the IMO introduce a 'partial feebate' system – a self-financing system – where, when a fuel is used that has a carbon dioxide equivalent (CO2e) intensity above an agreed benchmark level, a levy is charged, and where a fuel is used that has a CO2e profile below the benchmark level, a subsidy is provided," the company said in its white paper, released Friday.

"In addition to subsidising zero- or low-carbon fuels, the revenue raised from this levy could be partly used to fund further research and development into alternative fuels.

"Revenue in part should be used to help Small Island Developing States and other developing countries to manage energy-transition processes and to help them mitigate the consequences of climate change."

The International Maritime Organization (IMO) would need to gather more information about the quality and quantity of fuels used. It would also need to set up a panel of unbiased experts to determine the carbon intensity of various fuels and whether pollutants such as black carbon should be factored in.

The report says a previous proposal by shipping industry groups to put a $2/mt levy on bunker fuel sales to fund decarbonisation research and development "can and should be built on" but "would neither significantly affect fuel costs nor likely have a material impact on the development of alternative fuels."

The move would take its floating storage capacity up to about 1 million m3.

Container throughput climbed to 795,580 twenty-foot equivalent units (TEU) in September, up by 12.5% on the year and the highest month on record.