INTERVIEW: Monjasa Sees 'Uncertainties Like Never Before' for Bunker Industry in 2022

Global marine fuel supplier and trader Monjasa sees unprecedented uncertainty for the industry this year with the war in Ukraine leaving supply chains and global trade prospects in turmoil.

The result was much in line with what the firm had predicted for 2021 in an interview with Ship & Bunker this time last year.

Going into 2022 the firm initially had a conservative outlook, expecting a positive result and improving volumes but with profits below 2021's levels. But any attempts at forecasting have now been clouded by the situation in Russia and Ukraine, Svend Mølholt, chief operations officer at Monjasa, said in an interview with Ship & Bunker on Thursday.

"For 2022, when we built the budgets we said we expect activity to be on par with or to increase, and profits conservatively being below the levels of 2021," Mølholt said.

"What we're seeing now that we're going into the year is obviously that the crystal ball we applied in budgeting late last year looks very different now with everything going on in the world.

"We remain optimistic overall on our development in volume and support from customers, but there's uncertainties like never before.

"We continue to take a conservative approach to the results for this year and then observe and navigate the markets -- because the disruption we're seeing now, none of us have seen in our lifetime before."

Notably Mølholt did not make a bullish case for margins strengthening this year while crude and bunker prices have traded at record highs, suggesting the industry may not be seeing much of a windfall from the global jump in commodity markets over the past month.

"The outlook for the full year is still difficult to forecast, because global shipping and the economy go hand in hand, so when the global economy is on the increase, so is traded volume, and when it's in the other direction, then that impacts the volumes and margins," he said. 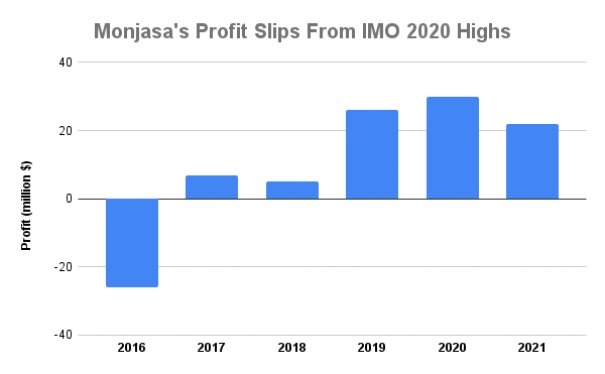 Monjasa's profits remain healthy, but have slipped from the peak seen during the shift to VLSFO. Image Credit: Ship & Bunker

Mølholt attributes the firm's fall in profits last year to the company no longer seeing the abnormal market conditions of the IMO 2020 transition. During the initial months of the shift to VLSFO, suppliers were able to command significantly higher margins while the product was new and unfamiliar and shortages were feared, but the market has since adjusted.

[In the IMO 2020 transition period] there were market inefficiencies that those who prepared well benefited from.

"What we saw in 2019 and 2020 were inefficiencies and disruptions in the supply chains primarily related to the transition from high- to low-sulfur fuel," he said.

"There were market inefficiencies that those who prepared well benefited from. 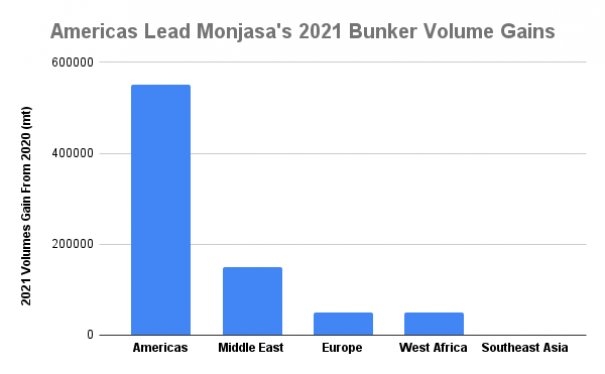 The Americas brought the most volumes growth for the company last year. Image Credit: Ship & Bunker

Monjasa saw either growth or steady volumes across all of the regions it covers last year.

We grow with our customers, with our relations and with the people that we get on board.

The firm has no immediate new plans to move into new areas, Mølholt said.

"We don't have any, let's say, geographical pins in the map that call for us to go somewhere specific," he said.

"We grow with our customers, with our relations and with the people that we get on board, and we'll continue to do that."

Moving on From Russian Oil

Monjasa was ahead of the curve in its response to the war in Ukraine, announcing in March that it had halted buying Russian-origin oil as of February 25, as well as stopping doing business with Russia-affiliated ships.

That decision has not proven too disruptive to the business so far, Mølholt said. But the larger challenge is now facing the whole market of what replacements are available for Russian-origin bunkers.

What we're seeing at the moment is that it is possible.

"I think it's been relatively easy to govern the statement that we put out, not buying Russian oil and not trading with counterparts that are directly related to Russian ownership," he said.

"I think the market is right now finding alternatives, and that does put pressure on availability and it puts pressure on prices.

"But what we're seeing at the moment is that it is possible."

The smaller companies in the bunker industry could be in for a difficult spell in 2022, with record bunker prices putting credit lines under strain.

What we are eyeing at the moment with the high oil prices is significant pressure on working capital.

"I think there's going to be consolidation, because what we are eyeing at the moment with the high oil prices is significant pressure on working capital," Mølholt said.

"As we've seen before the prerequisite to access working capital is that you have good corporate governance in place and that you have good trust with everyone from banks to suppliers to customers, so I think that's going to drive consolidation and make it harder for some of the smaller niche players."

But Monjasa does not plan to take this as an opportunity to buy some of the smaller firms that are struggling.

"In terms of Monjasa and acquisitions, we've proven able to grow our business organically by 63% since 2017, and we'll continue to do that," he said.

"Acquisitions could be a possibility as it relates to assets, meaning we do buy vessels now and again."

New guidelines on assessing the environmental impact of scrubbers could be made an official recommendation by the MEPC within months.

The firm will provide funds for Clean Air Engineering Maritime, Inc. to design a new system for MOL-operated car carriers to use from 2025.

Ships that have picked up contaminated HSFO in Singapore but are now trading away from Asia will be helped to dispose of the product.