INTERVIEW: Bunker One CEO Bullish on Prospects for Year Ahead 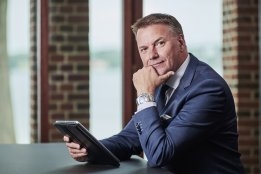 Bunker One CEO Peter Zachariassen says the company's main current focus is on the US. Image Credit: Bunker One

Marine fuel supplier Bunker One is bullish about its prospects for the year ahead after winning significant market share growth over the past 12 months.

Unlike other Bunker Holding units, the company has not released its financial results for the year to April 30, beyond reporting that its volumes increased by 20% on the year. In an interview with Ship & Bunker last week, Bunker One CEO Peter Zachariassen suggested that its earnings had fallen from the highs of the IMO 2020 transition, but that he saw improved prospects on the horizon.

"I'm very bullish on this year's performance," he said.

I believe that things are returning more and more back to normal.

"I believe that things are returning more and more back to normal.

"More customers are looking our way, so we are doing something right."

Parent company Bunker Holding saw its earnings before tax more than halve on the year to $70.3 million.

A significant share of Bunker One's volume growth over the past year will have come from the company's new cargo unit, Synergy Supply & Trading. Former GCC Bunkers trading director Keith Richardson was hired as supply optimization manager for the new brand in March.

"We have of course increased our footprint in the US, and we will continue doing so because it's a high focus for us," Zachariassen said.

It's important for us to have a setup where we are able to source and use our leverage in the entire supply chain.

"Getting closer to the product, it's important for us to have a setup where we are able to source and use our leverage in the entire supply chain, which end of the day will improve our competitiveness."

Through a deal with Vertex Energy, Bunker One has exclusive rights to marine fuel output from the Mobile, Alabama and Marrero, Louisiana refineries in the US. The company may consider selling excess product from this deal to other suppliers in the region.

"When you build up a cargo unit, it's always based on your own flows but excess volume can be sold to the market," Zachariassen said.

"We're also planning to do so if we cannot manage the entire flow ourselves on the physical side."

Bunker One may next look at setting up a similar model for its operations in Asia, Zachariassen said.

"We are very focused on the build-up phase right now," he said.

"But looking at the untapped potential in other areas, then it goes without saying that Asia is on the horizon, as we now have same setup built out in Europe, US and the MENA region."

The company also plans to make an announcement over the summer about a new physical supply operation in East Africa.

The other major development for the company over the past year has been its announcing preparations to supply biofuel bunkers in Danish waters. In May the firm announced its delivery vessel the Amak Swan would soon be supplying a 30% biofuel blend to ships around Skaw and Gothenburg.

"We have done our trial, and we have gained a lot of experience and technical expertise by the trials we've been doing on our own ships," Zachariassen said.

We're open for business and are in dialogue with multiple customers.

"And with this proof of concept, we're open for business and are in dialogue with multiple customers about supplying biofuels."

The firm may also look at setting up similar operations elsewhere, he added.

"We are looking into other areas," he said.

"We have focus right now on the United States -- this is something that is in the pipeline.

"In any area where we have any physical activity, we're more than happy to look into that."

Beyond that, the company is also seeking to build up expertise in other product arenas including LNG, methanol and ammonia to assess the possibility of supplying them.

"Building up the knowledge and being able to share our findings with our customers has been, and will always be, at the top of our agenda," he said.

The firm has invested $1.5 million into Rise-X.

The company, formerly known as Platts, will exclude Russian-origin material from the cargo and barge assessments in Northwest Europe and the Mediterranean as of September 1.