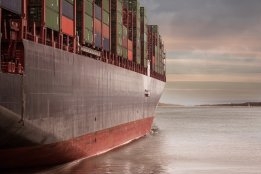 The share of the container fleet has dropped further, slipping to just 3.4% of total capacity, according to shipping intelligence service Alphaliner.

Just 198 ships totalling 799,643 TEU were left inactive as of August 31, Alphaliner said in its weekly newsletter Wednesday, down by 169,357 TEU from the middle of the month.

"As Chinese exporters will rush to ship out more cargoes before the holiday, a demand boost is expected during September, especially for the two big East-West trades."

Container lines are the largest buyers of bunker fuel in the shipping industry.

Just 25 boxships totalling 237,648 TEU of capacity were left inactive while undergoing a scrubber retrofit outside of routine maintenance as of the end of August, the company said.

The company has already received its first order, for two 2 MW dual-fuel engines to be installed on board the tugboat Hydrotug at the Port of Antwerp.

The system sets standards for suppliers on sampling and quality management, among other areas, and does not make the use of mass flow meters mandatory.