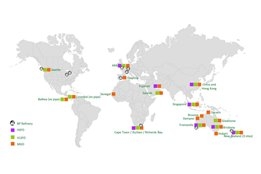 BP Marine today announced it is ready to retail 0.50% sulfur VLSFO bunkers, following what it said were successful sea trials with fuel manufactured and supplied in ARA and Singapore.

BP said it has also made a number of configuration changes at its refineries for IMO2020 fuel production, particularly with regards to the segregation, handling, and storage of the fuels.

"We have undertaken a comprehensive test campaign, conducting ship-board trials of our new very low sulphur fuel. Following the success of these sea trials, and working closely with our customers, we believe we now have a robust commercial offer that will support customers in complying with MARPOL," said Eddie Gauci, Global Head, BP Marine.

Big Gains For Crude As Confidence Over Economic Recovery Builds