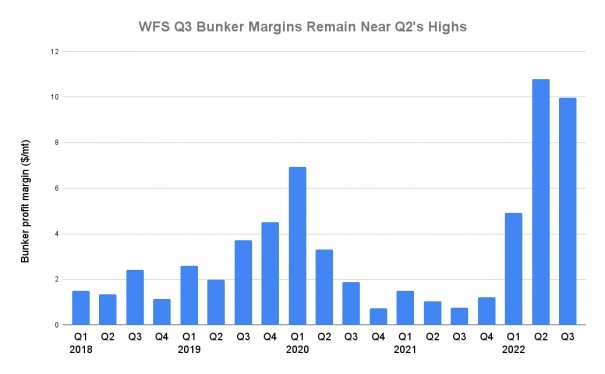 Q2's marine profit margin had been at the highest level since at least the third quarter of 2014. Image Credit: Ship & Bunker / Data Credit: WFS

US-listed World Fuel Services has seen the income it receives from every tonne of bunkers it sells hold near an an eight-year high in the third quarter of 2022.

The company saw net profit of $48.1 million from its marine division in Q3, up by 12.4% from the same period a year earlier and down by 6.4% from Q2's level, it said in quarterly results released late on Thursday.

That left its bunker margin at about $9.96/mt, up from $0.76/mt a year earlier and down from $10.80/mt the previous quarter. Q2's margin had been at the highest level since at least the third quarter of 2014, the earliest period for which data is available on its website.

The Q3 margin was 44% over the unusually high $6.93/mt level seen in the first quarter of 2020. During the uncertainty of the IMO 2020 transition concerns over the availability of the new VLSFO blends meant bunker suppliers were able to command significantly higher premiums than usual.

In a call with investors Michael Kasbar, CEO of WFS, said the marine division continued to perform 'extraordinarily well'.

"It has been quite a run to the container, dry bulk, and tanker markets with strong demand across all segments," Kasbar said.

"While the container sector is softening from historic highs, both tanker and dry bulk are still buoyant, and cruise while dealing with debt and inflation continue to experience strong demand."

Ira Birns, CFO of WFS, said price volatility and the uncertain outlook for marine credit were driving the company's profits from bunkers.

The marine team continues to do an outstanding job optimizing the volatile and credit constrained marketplace.

"The marine segment continue to perform tremendously well in the third quarter, benefiting from high bunker fuel prices, continued fuel price volatility, as well as the impact of inflation and interest rates, which tend to constrain broader credit availability in the market," Birns said.

"This resulted in quarterly gross profit of $75 million; that's nearly 3.5 times the amount of gross profit generated in the prior year.

"The marine team continues to do an outstanding job optimizing the volatile and credit constrained marketplace, while continuing to manage working capital and related risks with excellence.

Decline in Q4 But Yearly Gains to Persist

While the recent slide in bunker prices means the company's marine profits are likely to decline sequentially in the fourth quarter, the firm still expects year-on-year gains, Birns said.

"As we look ahead to the fourth quarter, with bunker fuel prices down approximately 30% for average prices ... the fourth quarter is currently not expected to be quite as strong as the third quarter," Birns said.

"However, we expect marine's fourth quarter results to again significantly exceed the prior year."