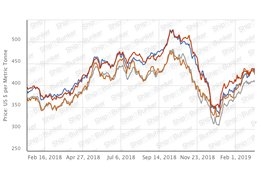 A growing number of readers have been writing to ask us about Ship & Bunker's plans to publish 0.50% VLSFO indications, so for the many others who are also wondering I wanted to take a moment to share answers the most common queries.

Yes we will as soon as those indications become available. Based on what we've most recently been told that is likely to be around Q3 or Q4 later this year. Prices in the major bunkering ports are expected to come first and the secondary and tertiary bunkering ports after that.

Why don't you publish 0.50% indications now?

All Ship & Bunker's published prices are derived from indications we get from market sources. That is, we do not assess markets and opinion on where price levels should be.

Bunker suppliers only offer regular price indications where there is an active spot market, and because the global 0.50% global sulfur cap for marine fuel does not come into force until January 1, 2020, with the exception of China were certain ECA zones have already implemented a 0.50% sulfur cap, global spot demand for VLSFO is virtually nonexistent. This is why we do currently publish indications for 0.50%S VLSFO in Taiwan as they have both supply and demand, but elsewhere we do not.

We will not start to see meaningful indications on a global level until demand for 0.50%S VLSFO picks up, which is expected to be around Q3 or Q4 later this year.

Why is there no clear answer on when there will be widespread VLSFO pricing, especially as we know there are VLSFO products available now?

For over a year now various suppliers have made VLSFO available in a number of global ports, but availability until recently has been mostly limited to agreements with buyers looking to trial the new fuels with a view to committing to contract volume going forwards.

This makes a lot of sense for both suppliers and buyers: For the suppliers, it means they have a clear understanding of demand so they can produce volumes accordingly and avoid any cost & logistics issues with storing any excess, especially useful while spot demand levels are unclear. For buyers, they know they are getting a consistent supply of product, which is important given all the talk of cross-compatibility problems between VSLFOs from different sources.

VLSFO is not the only compliant fuel, and many predict for 2020 that MGO will be the most popular choice for bunkers

Indeed, it is understood that a number of refiners have been suggesting customers commit to contract volumes for both their post-2020 VLSFO and HSFO needs, rather than relying on there being any spot availability. Pricing for contracts do not then make their way out as indications.

For example, when Ship & Bunker asked ExxonMobil about its position on VLSFO sales, the major said "it is ready to work with shipowners and operators to provide them with the contractual structure / structures that fully meet their needs, while the exact customers' terms and conditions under which it sells or will sell are confidential."

But spot availability and pricing will come, and Ship & Bunker has spoken to suppliers who confirm they will offer VLSFO on the spot market at some point this year. Again, the exact timing of that depends on when demand kicks in from buyers, and this is expected to be around Q3 to Q4 this year.

Another thing to keep in mind is that VLSFO is not the only compliant fuel, and many analysts including the IEA predict for 2020 that MGO will be the most popular choice for bunkers. With uncertain availability and the worries over cross compatibility, outside of the major hubs VLSFO demand may lag while buyers play it safe and lift MGO until the handling and availability considerations of VLSFO become a little clearer.

What is the thinking behind the Q3 to Q4 prediction for VLSFO demand to pick up?

We know that the January 1, 2020 start date for IMO2020 is fixed, so owner/operators not using scrubbers will have to start lifting compliant fuel at some point before this date. It has been suggested that this needs to be several weeks if not months in advance to ensure all high sulfur bunkers have been removed from the entire fuel system.

How the timing will play out in reality remains to be see, particularly as there are minimal incentives to do this early.

Based on typical bunkering schedules, and the expected uptick in demand for tank cleaning services, current thinking is that Q3 is the earliest buyers will start making the switch to 0.50%S products.

For its gas-fueled E-Shuttle tankers in Europe.

No deliveries for 380 cst at the Taiwanese port on or before December 16.