The R&D study evaluated liquified natural gas, hydrogen, ammonia, methanol and biofuels as potential green fuels. The aim is to provide insight to which “green” fuel is the most feasible marine fuel alternative for short term and long-term sustainability; these fuels were investigated on the comparison basis criteria of their energy densities, life-cycle analysis, availability, existing infrastructure, safety and cost.

Liquified natural gas (LNG) is leading the race as substitute “green” fuel. It has a relatively high energy density of 22.2 MJ/L, rapidly developing infrastructure and is widely available. However, it is viewed as a non-sustainable transition fuel due to emitting 2% more carbon during its life cycle. Many believe LNG has the potential to bridge to hydrogen due to similar cryogenic storge requirements.

Ammonia: On the other hand, Liquid ammonia with an energy density of 11.5MJ/L is another viable option which can used in existing engines and bunkering facilities. Used either as a hydrogen carrier or as a fuel, green ammonia can have zero emissions along its lifecycle when produced with green hydrogen or directly via electrochemical cells.

Methanol is another viable option with high energy density of 16 MJ/L. It gained popularity due its availability and easy storability. Renewable methanol (bio-methanol or e-methanol) have potentials of reducing GHG emissions by 65-95%. Bio-derived fuels show potential, such as biodiesel. But GHG emission reductions are hindered by land-use change and other upstream emissions.

Findings: The findings point to consideration of 3-time frames: now/short term, medium (5 to 10 yrs), and long (10 to 30 yrs) term. For the short term, for LNG, biofuels and conventional methanol are expected to be in use due to current infrastructure. For the medium term, the focus should shift to converting LNG engine/facilities to green hydrogen fuel usage and biofuels/methanol facilities to e-methanol. For this to be feasible, the cost of green hydrogen production should decrease to competitive levels. For the long term, corporations should invest in advancing green ammonia technology. Since, Ammonia can be used in existing engines/bunking facilities and it is massively produced, it has the capability to sustainably fuel the marine industry while ensuring zero GHG emissions. 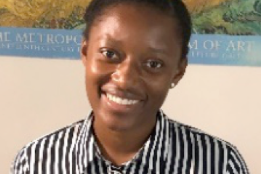 Daniela Bushiri is a Chemical Engineer at Refinery Automation Institute (RAI), where she led the R&D work in Marine Green Fuels evaluation. Previously she was involved in a Gulf Coast refinery blending modernization project. She is pursuing a doctorate in Chemical Engineering at Columbia University in New York. She can be reached at daniela@refautom.com

Wärtsilä units will be placed on vessels that operate in the Mediterranean Sea.

The company will work with fellow NYK Group company MTI, ABS and WinGD on the project.