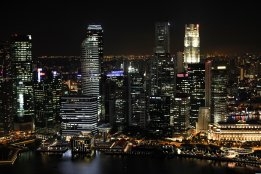 Three men were arrested in Singapore earlier this month for allegedly obstructing an investigation into ship-to-ship transfers of gasoil with North Korean vessels.

The three men, aged between 32 and 47, were charged on September 15 with several counts of conspiracy to obstruct the course of justice, the Singapore Police Force said in a statement on its website.

The police had received information in October 2018 about alleged ship-to-ship gasoil transfers between the Singapore-registered tanker Sea Tanker II and North Korean-flagged vessels. The three men arrested this month allegedly conspired to falsify records in the tanker's official documents covering the time when the transfers are alleged to have taken place.

Two of the three also allegedly dismantled and disposed of a CPU on board the ship that may have contained information relevant to the investigation.

"The police have zero tolerance towards any acts that intentionally obstruct the course of justice and will not hesitate to deal with such offenders firmly in accordance with the law," the Singapore Police Force said in the statement.

An Indonesian national who fled Singapore to avoid arrest for marine gasoil theft ends up in court six years' later.

The firm is looking for candidates with strong operational expertise in contract management as well as proven sales skills.