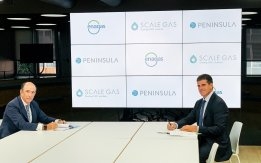 Marine fuel supplier Peninsula, which announced earlier this year that it was setting up an LNG bunkering business, has set out plans to jointly operate an LNG bunker barge in the Strait of Gibraltar with Enagas subsidiary Scale Gas.

The vessel will have 12,500 m3 of LNG capacity and will be built at the Hyundai Mipo Shipyard for delivery in June 2023, Peninsula said in an emailed statement on Friday.

The vessel will be chartered exclusively by Peninsula through an initial seven-year contract, and will take its gas from Enagas plants.

The order is to receive 11 million euros ($13.3 million) of funding from the European Union's Connecting Europe Facility program.

"This project is one of many initiatives around Peninsula's strategic pillars: customer centricity, sustainability and technology," John Bassadone, CEO of Peninsula, said in the statement.

"Peninsula and Enagás share a vision to develop the use of LNG as a maritime transitional fuel and having the support of a company like Enagás is an incredibly positive and exciting development.

"As one of the largest physical suppliers of marine fuels globally, this is the first step of our transition to a more sustainable future.

"This vessel will hopefully be the first of many that will offer flexibility and solutions across our global network to our customers."

The firm was responding to the announcement of the Cargo Owners for Zero Emission Vessels organisation this week.

Nearly 30% of gross tonnage currently on order is for LNG-fuelled vessels.