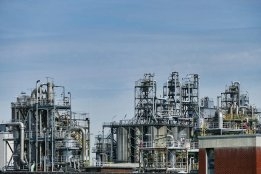 Methane slip is a considerable environmental downside to the use of LNG. File Image / Pixabay

French energy producer TotalEnergies is set to step up the gathering of data about methane slip with a worldwide campaign using drones.

The firm will use sensors capable of detecting methane and carbon dioxide emissions, attached to drones, in a worldwide campaign detecting and quantifying methane emissions across its operations. The data used will supplement that already being gathered using infrared cameras, ground sensors and satellites, it said in a statement on its website on Monday.

The campaign will provide a significant step up in real-world data being gathered on methane slip, rather than modelled assumptions.

Methane slip is a considerable environmental downside to the use of LNG -- as a well as a waste of energy -- and tracking where and how it occurs will help to reduce it.

The TotalEnergies plan is set to apply only to its on- and off-shore oil and gas upstream sites, but in principle the technology used could be applied to ships using LNG as a bunker fuel as well.

"TotalEnergies is committed to moving towards zero methane," Namita Shah, president of TotalEnergies unit OneTech, said in the statement.

"Considered to be currently the most accurate technology in the world to detect and measure methane emissions, AUSEA will help us to refine our emissions calculations, and to take stronger measures to reduce our emissions even further in order to achieve the targets we have set."

The firm's new unit in the country, Oilmar Greece SPC, will focus on developing its presence in the Greek market.

NYK Line, IHI Power Systems and ClassNK have signed a memorandum of understanding with the City of Yokohama for the planned vessel to be used there.

The company is looking for candidates with at least two years of experience in a similar role and a relevant degree.