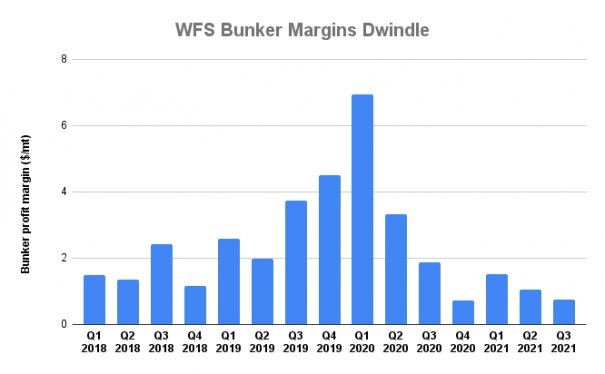 Fuel supplier World Fuel Services saw its bunker margins drop on both a yearly and a sequential quarterly basis in the third quarter, while its volumes jumped from to the highest level since the abnormal market conditions of the IMO 2020 transition.

The company reported net profit of $3.6 million from its marine division in the third quarter of 2021, down by 56% from the $8.2 million seen a year earlier and by 25% from the $4.8 million posted in the second quarter of this year, it said in quarterly results released late on Thursday.

The company's bunker sales volume grew by 9.3% in the year and by 3.9% from the previous quarter to 4.8 million mt, the highest level since the first quarter of 2020.

"In marine, market conditions remained challenging in the third quarter, compounded by the fact that we did not have the benefit from certain seasonal business we have generated in prior years," CEO Michael Kasbar said in an investor call on Thursday.

"However, we have begun seeing improvement in certain markets such as the cruise sector, where activity continues to recover with more ships sailing monthly."

"Although we may see some disruption from supply chain bottlenecks at certain ports, marine activity should benefit from the ongoing economic recovery and possibly higher fuel prices as well as we head into 2022," he said.

"As we look ahead to the fourth quarter, we expect marine gross profit to modestly increase both sequentially and year-over-year, driven by some signs of improving market conditions in our core business."

Martijn Kelderman has joined the firm as a bunker broker as of this month.

The firm has chartered the 6,000 m3 delivery vessel Optimus on a long-term basis from Elenger.