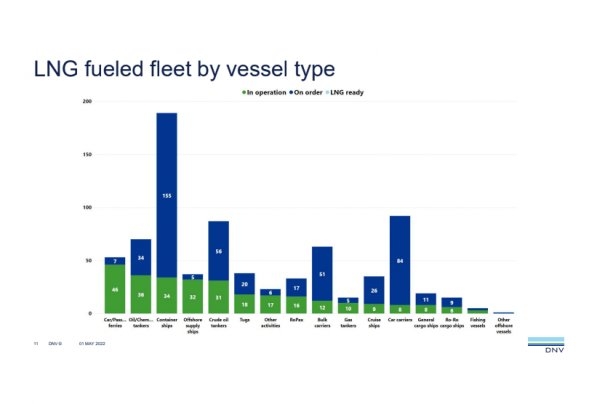 LNG-fuelled tonnage orders are on the rise in various segments. Image Credit: DNV

A total of 51 more ships capable of running on LNG as a bunker fuel were ordered last month, according to classification society DNV, but LNG bunker delivery vessel orders are not keeping up.

April's total of 51 new orders is 'well ahead' of last year and was driven mainly by orders for large oceangoing ships, DNV said in an emailed statement on Tuesday.

"Should this trend continue at the same pace, we could reach the 1000 vessels mark by the end of this year.

"However, although we expect growth to continue, it is likely to be more modest for the rest of the year.

"The challenge on the horizon is that LNG bunkering vessel contracting has not been keeping up.

"When gas prices come back to a level where LNG bunkering makes sense again there will not be enough bunker vessels on the water to serve all LNG-fuelled ships.

"At the same time, it's easy to understand fuel suppliers' hesitance to increase their bets and contract more tonnage in this challenging market."

The company is looking for candidates with four or five years of relevant experience and a strong understanding of Norwegian as well as fluent English.