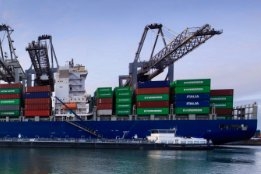 Scrubber-equipped tonnage now accounts for almost a third of global box ship capacity, according to the latest analysis by Alphaliner.

A total of 150 containerships were fitted with exhaust gas cleaning system (EGCS) units this year, taking the overall total to 850 ships with scrubbers as at December 20.

The capacity of the scrubber-equipped fleet is now 7.52 Mteu out of a total global capacity of 25.34 Mteu.

All of the top 9 carriers by capacity, who collectively account for 83% of global capacity, operate scrubber equipped tonnage.

However, the proportion of each carriers' fleet with scrubbers varies dramatically, ranging from HMM (83%) and Evergreen (69%) with the highest percentage of their fleets equipped with scrubbers, to COSCO at just 11%.

In terms of absolute scrubber-equipped capacity, MSC has the most at just over 2 Mteu, followed by one-time scrubber sceptic Maersk at a little under 1.5 Mteu.

The use of scrubbers has become increasingly lucrative this year, particularly for bunker buyers in Singapore where the HSFO/VLSFO spread currently stands at over $180/mt, having started the year at just $90/mt, according to Ship & Bunker data.

Alfa Laval will next move on to a pilot installation on an oceangoing vessel.