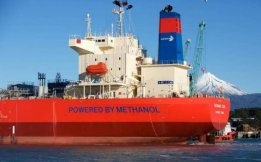 Japan's Mitsui OSK Lines (MOL) is seeking to boost the progress of methanol as a marine fuel as it takes a 40% stake in methanol freight firm Waterfront Shipping.

MOL is set to take a 40% stake in Waterfront for $145 million, it said in a statement on its website on Friday, with parent company Methanex Corporation retaining the remaining 60%. The deal is subject to regulatory and board approvals, and is expected to be completed by the end of the year.

Waterfront has a fleet of about 30 methanol tankers, including some running on methanol.

Interest in green methanol as an alternative bunker fuel has risen rapidly since the announcement from AP Moller-Maersk in February that its first zero-carbon vessel -- now due for delivery in mid-2023 -- would run on methanol. A large shipping company like MOL taking on the fuel for some of its future fleet would be likely to raise its status further in the industry.

The Greenway, managed by Eastern Pacific Shipping, took on 1,500 mt of LNG at Pengerang on July 4.