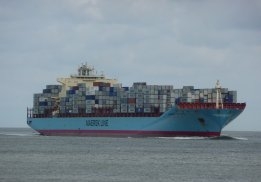 The announcement by AP Moller-Maersk on Wednesday that it will run its first zero-carbon ship on green methanol in 2023 will have come as a huge boost to proponents of methanol bunkers -- until now some of the quietest voices in the alternative bunkers discourse.

Maersk said it plans to have a 2,000 TEU feeder vessel running on synthetic or bio-methanol in 2023, in its first major announcement on its decarbonisation plans.

Just from a handling perspective, it's more accessible, and the engine is there.

"The reason that we have gone for methanol on the first one is that it is the most mature from the technology perspective; we can get an engine that can burn it," Morten Bo Christiansen, head of decarbonisation at Maersk, told Ship & Bunker on Wednesday.

"You actually have methanol vessels sailing already, I think there are eight of them.

"Just from a handling perspective, it's more accessible, and the engine is there."

Methanol bunkering is still in its infancy as an industry. One of its biggest developments was the conversion of a large ro-pax ship, the Stena Germanica, to run on methanol in 2015. But few ships have followed suit since then, apart from those carrying methanol cargoes.

The company's criticism of scrubbers in early 2017 brought about a significant cooling of interest in the technology among shipowners -- although it eventually relented and took some on -- and its rejection of LNG bunkering now may be having a similar effect.

While Maersk has not said it will be exclusively using methanol as its zero-carbon fuel, its decision to take it on first as the 'most mature' technology will raise large amounts of interest in it from parts of the shipping industry that may previously not have considered it as an option.

How to Develop Supply

The next challenge will be to develop a green methanol supply chain over the next two or three years. The ships currently running on methanol are using a product made using natural gas, with no particular environmental advantage over LNG, and the synthetic and bio-methanol that Maersk will soon want in large quantities is not yet commercially available.

Maersk will gain a first-mover advantage.

"There are a number of leading, global energy producers which are now turning their attention to the production of carbon-neutral fuels and chemicals," Chris Chatterton, chief operating officer of industry body the Methanol Institute, told Ship & Bunker by email on Wednesday.

"The technology for such products is well understood, it is becoming more efficient and incorporating a broader range of feedstocks in true circular fashion.

"This means that such fuel can be produced practically anywhere and not only in 'hydrocarbon-leveraged' countries.

"Of the projects recently announced, it appears that each one is consecutively larger than the last, so they are now scaling up, which means they will soon be more competitive.

"By moving into this space now, it also means that Maersk will gain a first-mover advantage, much as it did with respect to beating the IMO's stated 2030 decarbonisation targets already in 2020."

The company and its consortium partners have been awarded NOK 13.75 million ($1.5 million) in funding from Norway's Pilot-E program.