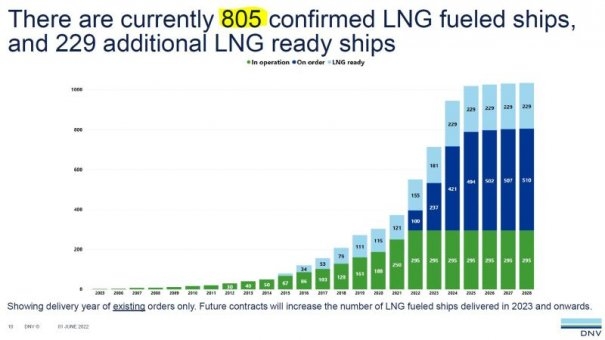 A total of 30 more ships capable of running on LNG as a bunker fuel were ordered last month, according to classification society DNV.

May's total of 30 new orders follows 51 in April and 14 in March, according to Martin Christian Wold, principal consultant in DNV's maritime advisory business.

"This month the growth is driven almost exclusively by containers and car carriers," he said on LinkedIn on Thursday.

LNG bunker fuel demand is growing rapidly as the orders pile up over the years. Supporters of the alternative fuel see it as an immediate means of cutting GHG emissions before better technologies emerge, but opponents see it as another fossil fuel and a distraction from developing zero-carbon fuels for shipping.

The total for 2022 so far is 151 ship orders. 240 LNG-fuelled ships were ordered in total last year, according to DNV's data.