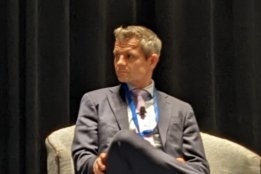 Container line AP Moller-Maersk, one of the world's largest consumers of bunker fuel, remains open to the idea of ammonia propulsion for its ships at a later date despite its heavy investments in methanol so far.

The firm sees methanol as a 'medium-term' choice, but sees other options on the horizon, Mikkel Kannegaard, CEO of bunker supply arm Maersk Oil Trading, said at the IBIA Annual Convention 2022 in Houston last week.

"We have a medium-term view about methanol focused on investments," he said in a panel session.

"Beyond that, maybe it's going to be ammonia, maybe something else we don't know.

Maersk ordered six new 17,000 TEU methanol-fuelled boxships last month. The firm has a total of 19 vessels with methanol propulsion on order, the first of which is due for delivery in the middle of next year.

Jesper Bo Hansen has stepped down as chief revenue officer as of the end of last month.