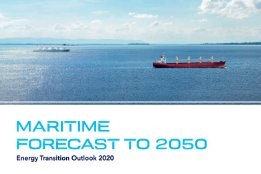 The future marine fuels landscape is growing increasingly complex and the timing of future regulations will play a key role in the future fuel mix, DNV GL says in the latest iteration of its Maritime Forecast to 2050 released today.

With the IMO 2030 and IMO 2050 emissions reduction goals set, the industry is being urged to embrace ways to decarbonize today.

However, DNV GL forecasts the uptake of carbon-neutral fuels will not happen until a clear and robust regulatory framework is put in place.

While not a view shared by all, as in its previous forecasts DNV GL sees a bright future for LNG bunkers, with fossil LNG seen to gain a significant share of bunker demand until the tightening of regulations in 2030 or 2040.

After this, the classification society sees bio-MGO, e-MGO, bio-LNG and e-LNG being used as drop-in fuels for existing ships, and bio-methanol, blue ammonia, or e-ammonia for newbuilds and some retrofits.

In response to customer demand.