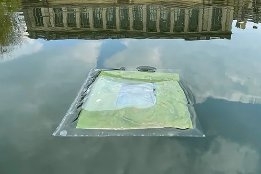 Researchers from the University of Cambridge have used floating 'artificial leaves' to generate clean fuels from sunlight and water.

Outdoor tests of the lightweight leaves took place on the River Cam, but the hope is they could eventually be used to operate on a large scale at sea.

"This is the first time that clean fuel has been generated on water, and if scaled up, the artificial leaves could be used on polluted waterways, in ports or even at sea, and could help reduce the global shipping industry's reliance on fossil fuels," the researchers said.

Professor Erwin Reisner's research group in Cambridge developed the first iteration of the device in 2019.

These leaves combine the advantages of most solar fuel technologies, as they achieve the low weight of powder suspensions and the high performance of wired systems

However, it incorporated thick glass substrates and moisture-protective coatings, which made the device bulky.

For the new version of the artificial leaf, the researchers took their inspiration from the electronics industry, where miniaturisation techniques have led to the creation of smartphones and flexible displays, revolutionising the field.

The result is a device that both works and looks like a real leaf.

Tests of the new artificial leaves showed that they can split water into hydrogen and oxygen, or reduce CO2 to syngas.

The results are reported in a paper published in the journal Nature.

"This study demonstrates that artificial leaves are compatible with modern fabrication techniques, representing an early step towards the automation and up-scaling of solar fuel production," said Dr Virgil Andrei from Cambridge's Yusuf Hamied Department of Chemistry, the paper's co-lead author..

"These leaves combine the advantages of most solar fuel technologies, as they achieve the low weight of powder suspensions and the high performance of wired systems."

While additional improvements will need to be made before the artificial leaves are ready for commercial applications, the researchers say the development opens new avenues in their work.

Portsmount worked with SMS Towage to make the change.

Oldendorff's stake in the firm will see one of the company's representatives join the AOT board.