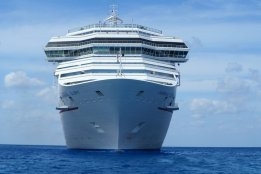 46% of the company's fleet currently has a shore power connection, 90% is equipped with scrubber systems and the company now has six LNG-fuelled vessels in its fleet. File Image / Pixabay

Cruise firm Carnival Corporation has said it is on track for its target of reducing GHG emissions by 20% from a 2019 baseline by 2030.

The firm released its 2021 sustainability report this week, updating its target to a 20% cut from a 2019 baseline rather than its previous target set against 2008 levels. The updated target adds five percentage points to its GHG reduction target against a 2008 baseline.

"Thanks to the dedication, support and proactive efforts of our entire global team, ship and shore, we continue to make strong progress in advancing our sustainability program across our six focus areas," Arnold Donald, CEO of Carnival Corporation, said in the statement.

"This effort includes our deep commitment to climate action and sustaining positive momentum toward achieving our carbon reduction goals for 2030, while working to be part of the solution to establish a path to net carbon-neutral cruising over time."

The firm has not released outright numbers for its carbon intensity metrics for 2021 because the ongoing downturn in cruise activity has meant the numbers are not comparable to its historical performance, it said.

46% of the company's fleet currently has a shore power connection, 90% is equipped with scrubber systems and the company now has six LNG-fuelled vessels in its fleet.

The institute has been contracted to install an LNG bunkering hose system on board the Haiyang Shiyou 301.

The event, on October 21, will focus on ensuring a just and inclusive transition towards low-carbon shipping.

Kenneth Dam, global head of bunkering at TFG Marine, called for a global effort to replicate the bunkering standards established by Singapore.