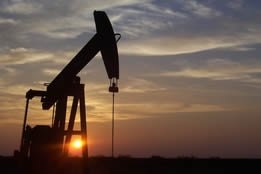 With the June contract for West Texas Intermediate trading on Tuesday morning at $14.40 and fluctuating constantly, and Brent trading at $19.80 per barrel, the question in the analytical community was: where does the commodity - and the oil industry in general - go next?

Dave Ernsberger, global head of commodities pricing for S&P Global Platts, said in reference to oil's May delivery falling below zero on Monday for the first time in history due partly to storage tanks in the U.S. running out of space, "That storage is just as full for June, if not fuller, than it was for May: already Cushing is 70 percent or 80 percent full, and that technically means it's closed for business.

"So we could easily see this play into the June contract pretty soon."

Steward Glickman, energy equity analyst at CFRA, said the situation will force the oil sector to move faster to close production, and the result will be fewer companies left standing after a period of consolidation and bankruptcies.

Edward Morse, global head of commodity research at Citigroup, put it another way: "The first one to shut the lights down is going to be the last one standing, [and] the last to shut the lights is the first to go because companies are looking to preserve cash flow, preserve their balance sheet, and reduce expenses until they can re-enter the market.

"There are a whole lot of companies that are going to fail, disappear."

It should be noted that Morse predicted in March that oil prices could turn negative, and now that they have he says oil could rebound by the end of the year to $50 per barrel.

Louise Dickson, oil market analyst at Rystad Energy, wrote in an email, "the next logical step [for American producers] will be shut-ins and bankruptcies; if these materialize in the next month then we can begin discussing optimism in June, but right now given the likely low compliance of OPEC+ cuts by May 1, the optimism is not yet warranted, and we could see a repeat situation next month."

Dickson was referring to a historic 9.7 million barrel per day (bpd) oil cut agreed by the Organization of the Petroleum Exporting Countries and many other oil producing nations come into play in May.

But governing everything is the course of the coronavirus, which globally has caused a reported 2.5 million infections and killed over 175,000 people (by comparison, the World Health Organization estimates the flu kills between 290,000 to 650,000 people annually).

Although the rate of infections has slowed dramatically in many countries, health officials are now theorizing that a second wave of the virus this winter could be more severe (or, they concede, prove to be even less severe than the current round).

Key to returning the global economy to some sense of normalcy is vaccine development, and on that score human trials will begin in the U.K. this week (a stage that normally takes years to reach): Oxford University, which began laying the groundwork in mid-January, recently stated that a vaccine could be ready by September, although rolling it out to the general public could take months.

Meanwhile, U.S. senator Rand Paul, who tested positive for and recovered quickly from covid-19 last month, said that with regards to the U.S. slowly relaxing its virus restriction this week, "Opening the economy will require Americans to rise above partisanship, to understand that deaths from infectious disease will continue, but that we cannot indefinitely quarantine."

While spreads between products may be heading back towards previous levels, the bunker market should not expect outright prices to do the same yet, according to Integr8.